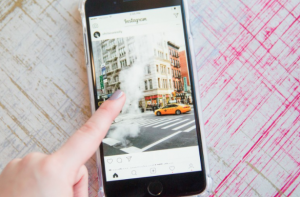 2017 has been the app’s biggest year yet. Image credit: Lili Sams | MASHABLE

However, rather than the large new number of users, the biggest matter to attend to is how rapidly its showing growth.

The apps latest growth was the fastest ever in adding 100 million new users, according to the statement made at an AdWeek presentation in New York City.

By giving users new functionality via website and permitting the addition of pictures from outside the app, the highly visual platform has attracted new clients who return everyday to Instagram, generating loyalty and new forms of interaction within the social platform.

This has interested advertisers who have seen more opportunity to invest within the service, as it opened its portfolio to another 2 million advertisers, all the while reaching developing markets and forging company personalities and thriving customer involvement.

E-commerce has become a 220-billion-dollar industry, according to PRC and Foundr Magazine, as the U.S. has evolved into the most important market and the key to driving growth.

Annually, U.S. eCommerce shows a consistency rate of over 10%, making it the leader of the global phenomenon, although China also aim for an important expansion, as eCommerce sales could reach one-trillion-dollars of additional sales in the next three years in Asian territory.

The mobile future is having its say

The transition to mobile has also helped the notorious thrive as 80 million websites sessions are related to more than 200 million euros worth of online revenue, according to Wolfgang digital.

As startups and web-related businesses are on the rise, eCommerce competition is looking to be firm and achieve a larger success than today, and that can only help Instagram grow larger than what anyone expected.

Read here about the celebrities most making money off of Instagram.