Where are the women CEOs?

Where are the women CEOs?

Why don’t more women get that No. 1 job in business?

Women are not leading the world’s largest companies, in fact, the gap in the top ranks of corporate America is massive. And it’s truly beyond the usual explanations. It’s not because they don’t fit the mold of the people who led before them, or they choose not to chase opportunities for promotion, it’s because they suffer higher barriers and a stigma rooted in biases against women in power.

Since 2000, when the U.S. Census Bureau started collected data regarding the evolution of women’s in the U.S. workforce, the professions of veterinarians, dentists, counter and rental clerks, photographers and pharmacists are some that have most added year-round female workers to their workforce from 2000 to 2016, but regarding company leadership, the glass ceiling is more than fragile, as CEO position has been one of the professions with least evolution and additions regarding female employment, resulting today in women accounting for just 6% of CEOs at the 500 largest American companies based on revenue, according to CNBC, and an approximate of 40 years to reach CEO gender parity in corporate America.

In a different research conducted by McKinsey & Co. and Lean In, a survey taken from 132 companies employing more than 4.6 million people showed almost every new CEO that was hired in the duration of 2018 was a man. According to the 2017 “Women in the Workplace” report, women are 18% less likely to be promoted than their male peers, causing that women remain significantly underrepresented in the corporate pipeline, and when they do, there’s a gig. 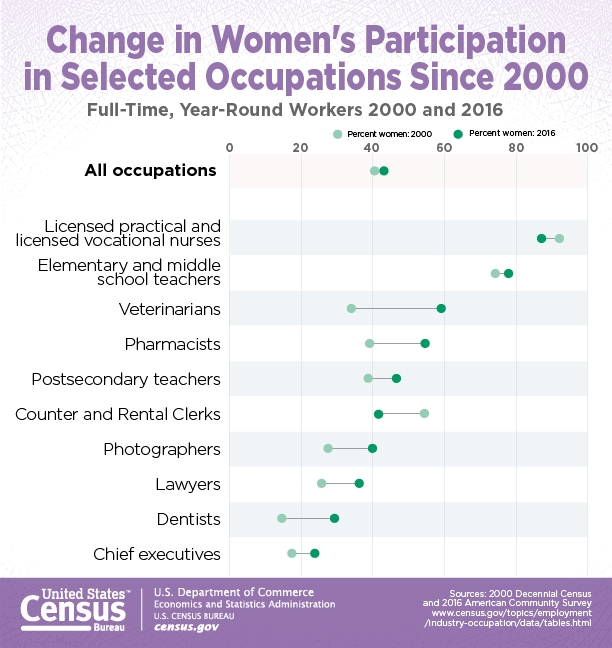 A 2013 study by the Strategic Management Journal found an interesting fact on hiring women CEOs: The appointment of female chief executives is traditionally followed poor company performance, why? Because the best clear turnaround a company can show is to start leading the company in crisis away from the traditional way it’s been managed previously: If the past leader was a man, a woman is a sign of change, writes Forbes contributor Nancy Wang. And what’s worst, female CEOs are significantly more likely to be dismissed than male CEOs, and even more importantly, a research document from the Social Science Research Network finds that male CEOs are less likely to be dismissed when firm performance is high (compared to when it is low), whereas female CEOs have a similar level of dismissal likelihood regardless of firm performance.

Women today lead 167 of the country’s top 3,000 companies, the Wall Street Journal reports, that’s more than double the share a decade ago, but still under 6%. How can this stop? How can it be prevented that women fall behind in promotions from the very first step on the management ladder?

Becky Frankiewicz, President of ManpowerGroup North America, writes for the World Economic Forum, that the single most powerful thing an organization can do to promote more women leaders is to create a culture of “Conscious Inclusion” – which is building the desire, insight and capacity of people to make decisions. She calls imperative for companies to lead, think and act with the conscious intent of including everyone. The biggest barrier to progress, she insists, identified by men and women, is an entrenched male culture based on merits created by men, shaped by presenteeism and defined by male standards.

Nancy Wang says “Let’s build sponsorship networks for women. Let’s select them for stretch roles, giving them the exposure and skills. Let’s include more men into these conversations so they can be aware of the glass cliff role of women CEOs. Finally, let’s support women in their roles as sponsors, significant others, or as family.”