A window into connectivity

A window into connectivity

CEO Alan Pellegrini is on the prowl for opportunities to boost the industrial capabilities of Thales in North America.

Thales prepares for the increase in demand for mobile broadband and satellite communications already happening in industries such as air travel, while keeping an eye on core businesses such as urban mobility solutions. 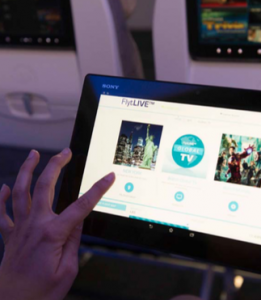 Thales Group is actively looking for investment opportunities to boost its industrial muscle in North America.

French based technology player Thales Group is actively looking for investment opportunities to boost its industrial muscle in the North American market as it positions itself to take advantage of the strong increase in demand for broadband in businesses not always known for speedy connections to the internet, such as the air travel industry, the company’s CEO for the North America division says.

Thales, majority owned by the French state and the Dassault Group, a large French conglomerate, sold US$15.7 billion (14.9 billion Euro) in 2016, of which around 10 percent was generated in North America. Alan Pellegrini, Thales North America’s head, mentions that he feels confident the company can make brisk business in all of its five core areas of expertise, namely aerospace, space, ground transportation, defense and security.

“We are in an extremely positive place right now with respect to being able to help shape those industries and our future in each of those markets. We retain strong market positions on a global basis,” Pellegrini, a veteran of 11 years with the group, says.

Perhaps it follows that as the former head of ales InFlyt Experience division, which focuses on onboard entertainment and connectivity solutions for commercial airplanes, Pellegrini has a very clear understanding of the needs of this sector. Where planes used to be a market for limited communications options and often clunky entertainment platforms, users are increasingly demanding and getting the same convenience and ease of access they get everywhere else.

“There are two markets in particular which I think are really good for growth and where we’ve made substantial recent investments… one of them is inflight entertainment and connectivity, with an emphasis on the ‘C’ part,” Pellegrini explains. “All airlines will eventually have connectivity installed on air-craft, providing internet access so passengers cannot just access emails, but actually stream on board, which means the amount of data and bandwidth we deliver to aircraft will increase dramatically.”

Another pillar of growth for the company in the region is cybersecurity, boosted by its 2016 acquisition of encryption company Vormetric, which planted Thales firmly in the Silicon Valley tech scene.

But entertainment is just a part of the equation in broadband communications. The demand for fast and dependable access to broadband is also growing exponentially in areas like industrial robotics as well as maritime and ground transportation, with the goal of automated, crewless cargo ships in sight possibly within a few years.

Thales has a long record of contributing to the global communication networks, with partnerships such as the one forged with satellite communications giant Iridium (for which they built 81 satellites —including spares— for the NEXT constellation), solidifying its position as a world leader in space-borne communications.

The US Government and scientific organizations such as NASA are also customers for the company. “Thales is looking for the right types of investments, be they organic or M&A, to support the growth of our space business in the US.

That’s work in progress, but we think there are very good opportunities for the reasons I mentioned earlier, and communications in particular are growing extremely fast.”

As well as in the stratosphere, the Group is also keen on maintaining its business firmly on the ground. The company “cut its teeth” in the US by providing analytics for security and data surveillance for Terminal 4 at New York’s JFK airport, one of the busiest air terminals in the world and home to over 32 international and domestic airlines.

“That was a very exciting project for us… and of course we will be looking to extend that into other airports as well.”

Another trend worth looking at is the expansion of urban areas, where more and more people live and work, requiring faster, safer and cheaper transportation. Whereas newer cities might have an easier time developing public transport works, older and denser ones (such as San Francisco or New York) don’t really have much space to expand their networks, so Thales is there to help optimize the systems.

“Cities continue to invest in upgrading Metro lines in order to handle higher capacity in a safer way. That’s exactly the kind of product we bring to a city like New York, where there’s not a lot of new places to lay track down so they need to find ways of increasing capacity and doing it safely.”

Thales offers a full suite of signaling, monitoring, surveillance, revenue collection, maintenance and support systems, and boasts of having signaled over 500 kilometers of tracks around the world.

A niche player in defense systems

Despite being one of the largest providers of defense systems like radar and sonar in the world, with sales for that sector representing about half of their total revenue in 2016, in the US Pellegrini describes the role of Thales in this sector as that of a “niche” player, ready to partner with the largest contractors.

In that field, he explains, “we are looking for places where we have the right product that could fit well with other large partners, so we don’t necessarily try to take on the big tier providers like a Lockheed Martin or Raytheon or Northrop Grumman, we look to partner with them to help them round out their solutions in a complementary fashion. Examples of that are our sonar products which are considered best in their class on a world basis for radar products… We recognize our place in the US defense environment is going to be as a strong collaborator and partner.”

Still, one thing to remember is the fact that in the fast-paced environment of technology companies, Thales has to be prepared to act as a disruptor and be prepared to face disruptions itself. Pellegrini mentions the example of Elon Musk’s Space X, the outsider that has come to change the environment in the space launch business with its reusable rockets.

“We have to be concerned not just with our own threshold competitors, but with what might emerge from this digital world. For that you need all your employees to have the mentality that disruption can be here anytime. We need to be the disruptors, not the disruptees,” he says.