Reports show growing recruitment among U.S. minorities, but history proves it may not last.

Unemployment for minorities is at a low-point in the United States.

According to Reuters, Black employment has risen about 1.3 million under Trump to hit a record 19.3 million in October.

Jobs gains have been stronger in industries where blacks earn the least. Source: Reuters.

During May, the unemployment rate for blacks sunk to 5.9%, the lowest since 1972 when the figure was first reported separately. In Memphis, where 63% of the population is black and more than a quarter lives in poverty compared with a 14% national average, a ‘gold rush’ moment is present, as industries like logistics and warehousing experience a “boom”.

But there is an interesting milestone that haunts government upswings long before Trump took office: Past upswings have not been strong enough to endure the next economic downturn and help workers weather the blow.

As minority hiring have remained clustered in industries such as food service, retail, and logistics, these markets tend to be the quickest to lay off staff when the economy slows, and the fear is that history repeats itself, leaving minorities vulnerable when leaner times arrive.

Since 1972, the share of Blacks in the total labor force has never stopped growing, and it can reach a total of 21.6 million by 2026 according to the U.S. Bureau of Labor Statistics (BLS).

However, although Black employment continues to grow over the years, Blacks and Hispanics continue to be underrepresented in STEM jobs (science, technology, engineering and math).

The reasons for this, according to surveyed Blacks already in STEM positions, are due to limited access to quality education, lack of encouragement to pursue these jobs from an early age, discrimination in recruitment and not easy-to-find promotions.

Pew Social Trends reports Blacks and Hispanics made up around 27% of the overall U.S. workforce as of 2016, but together they accounted for only 16% of those employed in a STEM occupation. 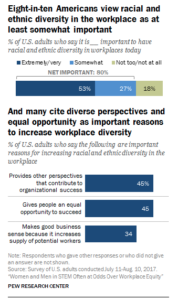 Despite still having much to work on, changes have come.

A 2017 Pew Research Center report found that a majority of Americans believe that increasing number of people from different races, ethnic groups and nationalities in the U.S. makes the country a better place to live, while another 8-in-10 Americans say it is at least somewhat important to have racial and ethnic diversity in today’s workplaces, including around half who categorize this as “extremely” (26%) or “very” important (27%).

Pew Social Trends continues to explain that relatively few Americans view racial and ethnic diversity in today’s workplaces as “not too” (9%) or “not at all” (9%) important.

On how embracing diversity and racial inclusion boosts the workplace, 45% of U.S. adults say it provides other perspectives that contribute to the overall success of companies and organizations.

In the past years, the share of African American women in the labor force has been growing to the pace of passing their male counterparts.

The Bureau of Labor Statistics stated that during 1988, men and women made up an equal share of the Black labor force.

Since then, rates have started to stabilize, however, women projection is still set to increase more than the male landscape towards 2025, BLS reports.