Younger households in the US and Britain seem to finally be heeding ages-old advice from doctors and buying more fresh fruit like bananas while purchasing (and possibly consuming) less alcohol, according to several surveys.

The US’ Consumer Expenditure Survey shows that since the turn of the millennium, households headed by under-25s have increased their spending on fresh fruit by 77% and on fresh vegetables by 47% (in real terms). 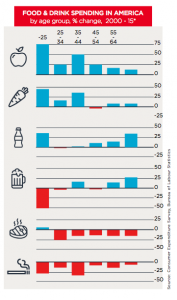 According to data from Britain’s Office for National Statistics, the same pattern holds across the Atlantic.

Berries and bananas, in particular, have become popular at breakfast, often stacked on top of a pile of yogurt or blended into a smoothie.

Millennials making these decisions reflect some of the most recent shifts in spending in America as far as the most dominant age-force in the world.

They have also cut back on booze.

A tendency on the rise

In other numbers, dining out is increasingly popular, as it accounts for 42% of Americans’ food budgets, up from 26% in 1970, according to the 1843 Magazine, from The Economist.

So, bananas are shaping up a new food culture in modern U.S.