Mounting fears regarding the outbreak have seen air carriers hit the hardest.

The rapid spread of coronavirus has wiped almost a third of value off the world’s top 20 listed airlines and upturned global rankings, elevating Air China into third place behind U.S. rivals, according to an analysis by Reuters.

Amid falling ticket demand and Italy on lockdown, no other industry has been more heavily hit by the outbreak, with carriers forced to cancel routes and slash costs just to survive. With a fierce investor sell-off underway, United Airlines has lost its number three position in the global line-up to Air China. The U.S. carrier’s market capitalization has halved to $11.6 billion, the lowest since 2003, since the start of the year.

Southwest Airlines CEO Gary Kelly says the outbreak might be worse for airlines than the terror attacks of 2001. An industry trade group believes it will be more damaging. AP News reports that United Airlines expects to lose money in the first quarter for the first time in six years. United said ticket sales in the U.S. have dropped 25% in recent days — 70% after subtracting cancellations — and it’s even worse in Asia and Europe. Delta Air Lines said travel demand has fallen so sharply in the past week that it expects one-third of seats to be empty this month on flights within the United States, which was insulated from virus fallout for a time.

Air China has been relatively unaffected by the fears. Its market cap was $15 billion on Tuesday, compared with $19 billion on Jan. 2.

Elsewhere, the world’s most valuable airline, Delta Air, has seen more than $10 billion wiped off its value so far in 2019, taking its market cap to about $28 billion, the lowest in four years. 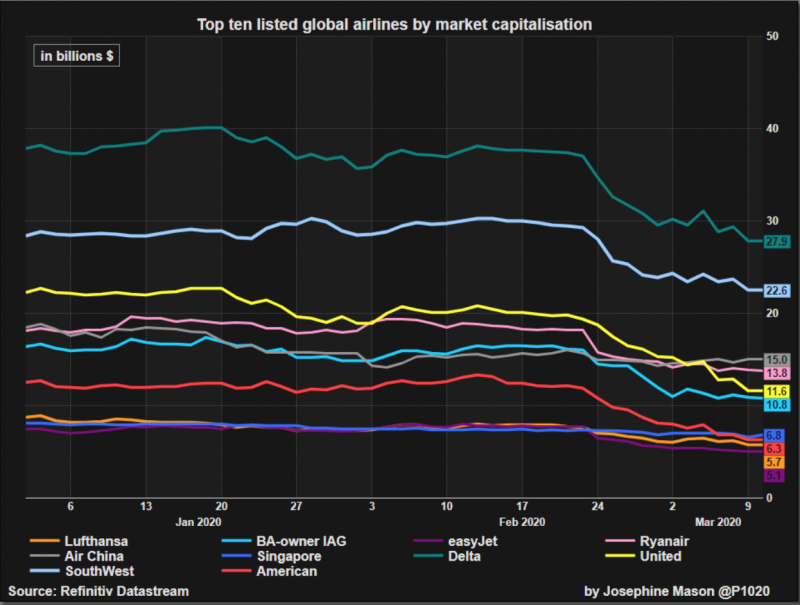