Slow user and revenue growth have driven Facebook to the ground after suffering its steepest decline since its shares started trading six years earlier. 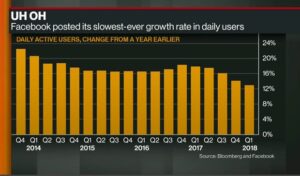 The number of North American daily active users on the site remained flat, while the European user base actually shrank following the Cambridge Analytics scandal and new data protection rules.

On Thursday, July 26th, more than $110bn was wiped off the value of Facebook shares, making investors rethink the company’s financial prospects regarding data privacy.

Facebook blames wrong decisions and results regarding con currency movements, new advertising formats and —surprisingly— giving users more control over their privacy on the social network, however, it did not attribute anything to the Cambridge Analytica scandal.

This price plunge, which climbed to new highs last week to hit $218 amid a sharp rally across the technology sector, according to The Financial Times, and made the biggest one-day value destruction of any listed company in US history, is equivalent to the entire market value of Nike or McDonalds, and larger than General Electric, Goldman Sachs, and the entire Argentinian stock market.

Another big hit for Zuckerberg

Mark Zuckerberg, company founder, also took a big blow, as the value of his stake fell by around $15bn today, or £11bn.

This leaves him with a personal fortune of around $72bn, due to his stake in the social media firm, according to reporting from The Guardian.

Mark Zuckerberg faced one of the toughest tests of his career when he testified in two congressional hearings regarding the recent scandals to have afflicted the social media giant involving the 2016 US election.

The word of investors

According to the Wall Street Journal, investors say the lackluster results have renewed concerns that the massive growth in revenue and profits among some of tech’s stalwarts may not be sustainable—and that could put another hurdle in front of a stock market already grappling with trade tensions and concerns of a possible policy misstep by the Federal Reserve.

Shares of Amazon slipped 1.3% in recent trading, The Wall Street Journal reports, while Netflix fell 0.9% to extend its decline so far this month to 8.2%. Netflix, one of the best-performing stocks this year, has struggled since it missed its own forecasts by more than a million subscribers in the second quarter.