The business behind marriage

The business behind marriage

As marriage costs rise and the market becomes saturated, wedding tendencies are set to change.

The overall cost of a wedding —and its trends— have soared to new heights. 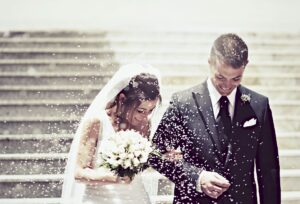 Summer weddings still remain a popular season, but fall has taken the top spot with 40% (up from 30% in 2009) of couples hosting their nuptials in the fall months.

However, that is not the only thing changing in the wedding industry, as experts say the market faces saturation.

David’s Bridal, one of the largest bridal retailers in the U.S., has battled competing with online retailers and cheaper dresses.

Anne Chertoff, wedding industry consultant, told Business Insider what she thinks David´s Bridal must do to pick up on the industry.

“David’s Bridal would need to continue making significant investments in digital capabilities and marketing in order to reverse its market share declines of the past several years,” she said. “These investments are needed to attract the bride early in her online-first research process and then provide a seamless bricks-and-clicks shopping experience.”

Marriage tendencies for the future

As nearly 13,000 US brides and grooms married in 2016 were surveyed to uncover the financial spending habits and trends of real weddings in America, these were some of the key findings:

As for other matters, location and season trends have also evolved.

Follow up more on the matter on the complete research from XO Group Inc.