China is showing a new confidence globally in its cultural, economic and diplomatic model. President Xi Jinping has further strengthened this stance as the country’s paramount leader despite.

Under his Mao-style personality cult wing, from retail to supply chain, and international trades, the country thrives despite the economic contest with military and ideological dimensions his country sustains against the United States. China with Xi Jinping has set base for world-class industries in everything from 5G and artificial intelligence to biotechnology and quantum computing in means to unsettling the United States as the world’s leading technological force. President Xi Jinping has described this formidable ambition to become a technological superpower today as: “catch up and surpass”, according to Foreign Affairs.

There are many ways to unravel and explain the way in which China shows an increasingly ambitious international posture, but two interesting ones stand out in aims of explaining where the country wants to go next:

On September 2, The State Council of China issued a circular that outlined the plan to develop the country into a leading sports power. It included plans of fitness for each citizen as well as ideas to inject capital to local sporting clubs in order to establish the country as a global leader of the sports industry, and not just in the broadcasting arena, where it proved to perform well after the 2008 Summer Olympics, as superb sporting action was delivered to the world via television, Internet and mobile phones, offering fans unprecedented choice of what, when and where to watch the sporting action. However, it is not enough. China wants to position itself as best-of-the-best competition-wise and triple the value of its professional sports industry to 2 trillion yuan ($290 billion) by 2025: Talk about a job to do.

According to the objectives within the State Council circular recently released, people who often take exercise should account for over 45% of the Chinese population by 2035; also, it highlights China should become a modern leading sports socialist country by 2050, and people’s physical fitness, comprehensive levels, and global influence in sports, the country should be ranked near the top across the world.

China’s ultimate goal is to generate a modern sports industry system through building a complete sports industry chain, accelerating the integrated development of sports and its related industries. In order to advance this ambitious national fitness campaign, a series of efforts are set to be put in motion as soon as possible in the country grounds. According to the State Council circular, some of these are:

Can it be done?

The ultimate goal is tough, but not impossible, at least for President Xi Jinping. It’s also safe to say the industry is going up, so possibilities are high.

Recent reports have seen the overall value of the Chinese sport industry has rise sharply in recent years. In 2013, the size of China sports industry market amounted to just over 56 billion U.S. dollars. By 2016, it was valued at $276bn, an 11.1% increase from 2015, while in 2017 it grew by another 15.7% year-on-year to $320bn. A report by QuestMobile also showed the number of sports and fitness participants in China has also increased by 1.7% year-on-year to hit 64.22 million in May 2019. Sports and fitness mobile app users are currently at over 60 million, showing significant user growth as well. 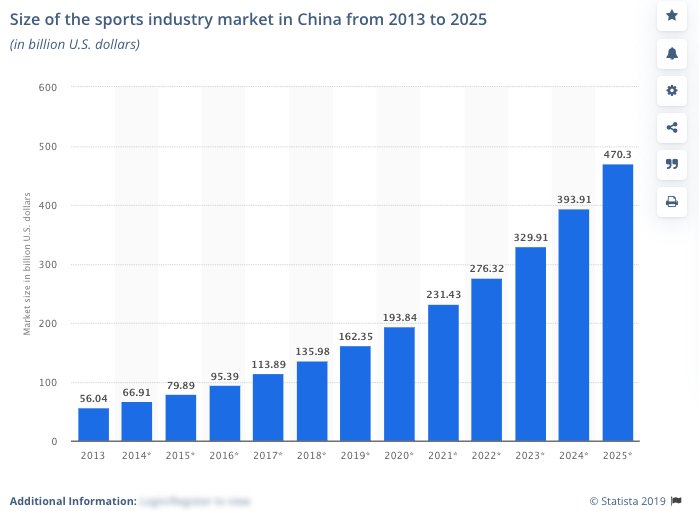 As times of controversies loom in largely, US executives have a new way to deal with China: Sports.

Some businesses are bending the knee to Beijing and far fewer are pushing back, and the NBA is one of them. The Chinese company Tencent, which has the exclusive rights to stream the NBA in China, has quietly resumed online broadcasts in China of National Basketball Association (NBA) preseason games after a dispute that prompted all of the American league’s official Chinese partners to suspend ties, according to CNN information. The Chinese are gaga for basketball, as nearly 500 million Chinese people streamed NBA content last year (notice that the US’ entire population is fewer than 330 million), so, yeah, it’s big money, as according to CNN Business, the NBA’s business in China is worth an estimated $4 billion, and the league has even invested in building basketball courts across the country.

When considering other sports, President Xi Jinping is a football fan, he has even made public goals to establish the country’s audacious goal to win a World Cup by 2050, and the citizens are not very far behind, as Forbes reports tremendous Chinese viewership in European Leagues, as well as large acquisitions ticket-wise, as the Chinese bought 40,000 tickets for the Russia 2018 World Cup, according to FIFA, —8,000 more tickets than the English, traditionally the largest ticket-buyers at the FIFA World Cup. For TV viewership in the Russia tournament last year, China was No. 1 with 250 million people, or 20% of the country’s population. (Compared to 150 million for Brazil, or 80% of the population, and 100 million for the USA, or 40% of the population). The country was also big in sponsorship as  Chinese companies like Vivo (cell phones), Wanda (entertainment) and Mengniu (dairy) poured in $835 million to the sporting event, roughly a third of the total sponsor advertising.

Since the announcement of the 2022 Winter Olympics being held in Beijing, the number of visitors to ski resorts in the country has tripled from 5.5 million people in 2009 to 15.1 million in 2016, making China the world’s largest beginner market for winter sports.

When it comes to eSports, China is ready to overtake South Korea as the second largest eSports market right after the Unites States in 2019 and continue to grow at a compound annual rate of 21% until 2023, according to industry reports compiled by eSports analyst Newzoo and PwC consultants.

As Earth is apparently too small for China’s economic ambitions, the country has recently revealed its plan to create the first Earth-Moon economic zone by 2050.

According to Global Times, On October 30th, Bao Weimin, director of the Science and Technology Commission of the China Aerospace Science and Technology Corporation, revealed the ambitious plan to establish an Earth-moon space economic zone by 2050. He said this at a seminar on space economy, pledging that the country would hurry to study the reliability, cost, and flight-style transportation system to successfully plan and ultimately build an earth-moon space economic zone, as there is huge economic potential, according to Bao.

Bao also mentioned that the basic technology is set to be finished by 2030, while the key transport technology is expected to be created by 2040 and inaugurate before 2050, this after a China launched a relay satellite to set up a communications link between the Earth and the then planned Chang’e-4 lunar probe, which accomplished the first-ever soft landing on the far side of the moon. This was praised as a historic moment for human space exploration as the successful touch down, according to The Guardian, turned into a major technical feat and an important step for China towards enhancing its capacity for scientific and technological innovation and widening ambitions in the international space race.

When the announcement was made, divided opinions flooded the web, however, many see this as a big step in getting ahead in the race for space. Aerospace fans even predicted that the plan of this Earth-moon space economic zone will accelerate many important projects for the country, including the Long March-5 carrier rocket, China’s largest launch vehicle, which is expected to be used to send the Chang’e-5 probe in 2020 to bring moon samples back to Earth, in what would be the country’s first independent interplanetary mission. The Long March-9, China’s heavy-lift carrier rocket, is also expected to receive more support and investment after the announcement by Bao Weimin, as it is scheduled to make its first flight around 2030, supporting manned lunar exploration, deep space exploration, and construction of a space-based solar power plant.

Though the OECD estimates that China now has the second-highest combined civil and military space budget in the world, it is still difficult to estimate the full cost and times of building and operating a permanent space station like China ambitions, even because some Chinese officials have also started to share and express their growing concerns on whether the country can or cannot afford to continue to heavily invest in various space programs. Non the less, Lt. Gen. Zhang Yulin, deputy commander of the China Manned Space Program, clearly indicated that China will use the next 15 to 20 years to develop the requisite technical capabilities for conducting manned lunar missions.