Internet users of the world

Internet users of the world 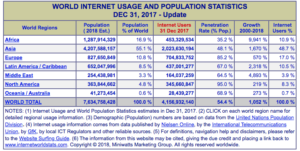 Internet usage information comes from data published by Nielsen Online, by the International Telecommunications Union, by GfK, by local ICT Regulators and other reliable sources.

A recent study from Internet World Stats just proved Asia collects up to 48.7% of the Internet users in the world by region.

In a far second place is Europe with 17.0%, Africa with 10.9%, and Latin America and the Caribbean with 10.5%. North America, the Middle East and Oceania/Australia finished at the bottom.

Users and Internet penetration: not the same

However, despite the large amount of people with access to the web, Internet penetration is not as good for the regions with large amounts of web users.

North America, for example, placed at number 5 in the amount of people using the web, is number 1 in web penetration.

Asia and Africa, numbers 1 and 3 among the amount of users, are the two regions with the less amount of Internet penetration in the world.

A rising trend for Asia

According to a Business Insider article, southeast Asia grew 70 million new users since 2015, making this region the third-largest market globally in terms of web users.

As consumers spend 3.6 hours per day on the mobile internet, more than any other market, Internet usage is set to peak even more.