Lyft launched its first ever diversity report, and other companies are following.

This information, according to the transportation mobile app, will hold them accountable and will determine their actions they take to make a difference to the people who come to work every day at Lyft.

Although information regarding LGBTQ and disability employment is lacking on the final report, the company said it will deliver diversity and inclusion data points every year in a search of identifying new work opportunities.

Like mentioned earlier, Lyft is not the only tech corporation showing off information of its kind. 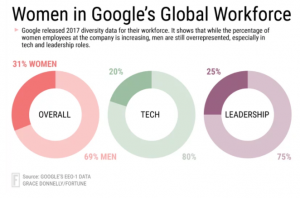 Growth of women in Google´s workforce.

Maxine Williams, Facebook’s global head of diversity and inclusion, said: “It’s a reminder to those of us working on [diversity] what we were able to do over the last 365 days” (…) “But also a reminder of how far away we are from where we want to go.”

As for Google, data shows that woman workers are on the rise, however, small improvements have been seen for minority workers.

Here are the top companies of diversity in 2017 according to DiversityInc.

The Corporate Equality Award was given to Lyft in recognition to its efforts of innovating and ensuring a more inclusive environment, despite past problems.

Company´s standards were raised in September when Tariq Meyers was appointed head of inclusion and diversity for the corporation.

Lyft is one of the youngest companies to ever receive the award.