Women are definitely not paid the same as men in soccer.

We are all amazed by the earnings Neymar will receive as PSG´s new soccer player, but it should hurt more knowing the pay disparity there is in the sport between men and women.

Truth be told, there is a more-than-normal pay disparity between men and woman. 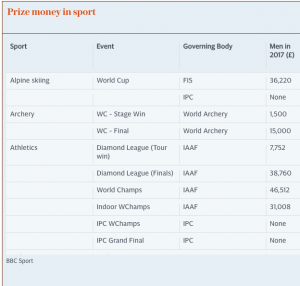 The brazilian Marta Vieira da Silva, who plays for Rosengard in Sweden, is the queen of soccer earnings as she receives $500,000 a month.

However, Neymar´s monthly earnings at PSG are expected to surpass the 3 million dollar every month… talk about a pay gap.

Next on the rich-list for women is Alex Morgan, the USA player who pockets approximately $450,000 dollars each month.

On second place for men is the portuguese Cristiano Ronaldo, who closed 2016 with a 22-million-dollar monthly earning, still 44 times more than the highest earning female player.

A study conducted by the BBC into 68 different sports proved that 83% of sports now pay men and women the same amount in prize money, although soccer strays behind.

The breach that is seen among pay disparity goes on to the teams, where it is equally notable the loss women´s category has against the mens discipline.

In their report, it was stated that despite winning four Olympic gold medals and three World Cup championships, men are still overly-payed than women.

The claims went on to the public eye and caused a loud echo inside soccer administrations, who have taken into serious matter equalizing the considerable breach in earnings.

With the Neymar situation lurking, the conversation has reached a new peak, although it has been proven that the men´s discipline is set to leave a considerable plus amount of earnings, it looks like it´s time to change the way people think about investing in the capabilities of women, don´t you?

Learn through Sport Fitness Advisor the essentials in conditioning and training.