Once hailed as the next big social media app, Snapchat is struggling.

Once touted as the future of social media and the natural heir to the likes of Facebook, social media app Snapchat is in trouble. 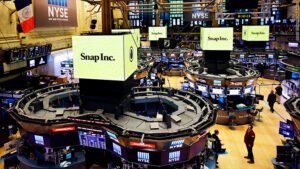 The social media company, which also brands itself as a camera company, said it took in $230.6 million in sales during the first three months of 2018, well below analysts’ estimate of $244.5 million.

Although its stock is recovering value after hitting an all-time low in mid-May, a much-vaunted redesign of the social media app has failed to boost stagnant user growth and investors are worried.

First appearing in 2011, Snapchat was intended to be a new type of social media app. Based on private, person-to-person sharing of photos and videos, along with messaging and video chats, its principal market was younger millennials and Generation-Z. In 2016, Forbes hailed Snapchat as the “future of social media.”

In March 2017, investors had rushed to buy Snap at the $17-a-share IPO price and then drove it up by an eye-watering 44 percent in the first day of trading.

In November, however, parent company Snap Inc. embarked on a dramatic reorganization of the app to combat sluggish growth and user additions and sales slowed even further amid a public revolt over the new design.

Nearly 600,000 users have signed a Change.org petition asking Snap to revert to the old version, while others are complaining on social media. A fake tweet which claimed the company would change back to the old design if it got 50,000 retweets now has over 1.3 million.

In mid-May, its stock plunged to a new low, below $11 a share, after a dismal earnings report that showed stagnant user growth.

On the search for Snapchat’s Sheryl Sandberg

Twenty-five-year-old CEO Evan Spiegel argued that while the change to Snapchat’s design was disruptive in the short-term, it was necessary to push its business into the future. Yet two quarters in, he’s having a hard time convincing people. Analysts are rushing to cut their ratings on Snap, Inc. (SNAP) to a dreaded “sell” and are slashing their price targets.

According to one analyst, it may be time for Spiegel to take a page from Facebook CEO Mark Zuckerberg, hiring a second-in-command that Wall Street respects. Writing for CNN Money, Paul R. La Monica claims that Spiegel needs his Sheryl Sandberg, referring to the COO of Facebook, or Eric Schmidt, the veteran tech exec who was CEO of Google when it went public in 2004.

Elsewhere, writing on Medium.com, tech writer Owen Williams says that Snapchat, with its heavy Generation-Z demographic, needs to innovate faster, claiming both Facebook and Instagram have emulated – and improved upon – its best ideas.

“Snapchat, as it stands, isn’t going to survive. Maybe it evolves into a media platform instead, or something bigger, but in its current I don’t think it’ll be able to hold out,” he wrote.