Those who cannot run

Those who cannot run

Authorities are calling for people to self-quarantine to mitigate the risk of the coronavirus’ spread, but what happens to those inside communities that have nowhere to go?

“It is absolutely impossible to practice social distancing in prison,” says Laron Rogers to Daniel A. Gross, reporter for The New Yorker. Larry is serving twenty-five years to life at Sing Sing, a maximum-security prison in New York. “As you might imagine, we are extremely concerned with the lack of information concerning a contingency plan,” it continues to read. “We all feel like it is only a matter of time before this virus enters and spreads rapidly in here.”

Coronavirus poses a high threat to all, but mostly to elders and infants, though it can affect anyone regardless of their race or ethnicity. And as the President has called for Americans to avoid social gatherings of more than 10 people and to limit discretionary travel, what is there to do in jails and prisons where thousands gather and live on a daily basis?

Across the world, violent reactions have occurred in federal and state criminal justice systems. In Colombia, there was a “massive and criminal escape attempt” in Bogota’s La Modelo prison, where at least 23 inmates died and 83 suffered injuries, per CNN. In Italy, riots have blasted as officials have taken the decision to restrict and limit family visits. In other cases, inmates have died of drug overdoses after breaking into the prison infirmary during the violent uproars. In reaction to containment measures regarding the COVID uncertainty, relatives of inmates have also confronted police in the outsides of the prison, resulting in an even more vicious reactions from inmates, ABC News reports. Now, as the pandemic strengthens and threatens to turn big cities like New York into the world’s new epicenter of the disease, US and global authorities see themselves forced to study how other countries are handling or mishandling their prison management situation amid the COVID-19 fears. According to BuzzFeed News, the matter is now not just about the novel coronavirus contagion could present itself and rise among inmates, but also about those who get infected won’t come forward until it’s too late, whether it be for their own health or for the ones surrounding them. “If you think a cruise ship is bad, think of a prison,” said Kate Chatfield, senior adviser for legislation and policy at the Justice Collaborative toBuzzFeed News. “They’re sitting ducks.” Wired reported March 24th that at least 38 people involved in the New York City correctional system have tested positive for COVID-19, including convicted rapist Harvey Weinstein, who is currently incarcerated at Wende Correctional Facility in western New York state.

In response to this rising matter, nine advocacy groups on both sides of the political spectrum, which include the American Civil Liberties Union, Justice Action Network and FreedomWorks, urged President Trump through a letter to The White House to use his clemency power to commute the federal sentences of people eligible for compassionate release and other inmates at high-risk from the virus. According to NPR, a bipartisan group of 14 senators, led by Illinois Democrat Dick Durbin and Iowa Republican Chuck Grassley, is also calling for similar action from the administration. But, even though jails across the world have already started sending some low-risk inmates home, its seems just a temporary solution to a problem to what the World Health Organization (WHO) warned will grow far larger, thus calling for even a bigger and long-term change plan for the penitentiary system. Jails in Arizona and Minnesota, for instance, Ozy News reports, have waived medical co-pays and fees for personal hygiene supplies — partially meeting a longstanding demand for better, more sanitary conditions in prisons. Elsewhere, such as in Maine and Oklahoma, courts have dropped or suspended warrants for petty offenses like unpaid fines or white-collar and property crimes. Experts warn that decisions on the prison administration and inmates release cannot be taken lightly, though. “The challenge for courts now is going to be when you have a pandemic that potentially affects everyone. You can’t open up all the jails like Iran reportedly did,” says Danny Cevallos, legal analyst.

The dangers of COVID19 are everywhere, but especially with incarcerated groups and other who live inside a small space with other people, thinking immigrants in camps as well, who are regularly large in population, making social distancing impossible, representing, most obviously, that there is a blatant lack of coordination within these system, more specifically when an epidemic bursts. Maybe, Ozy News adds, it’s an opportunity for America and the world’s long-beleaguered incarceration system to do some serious soul-searching for the future. Why? Because the danger is imminent. For a few days now, Roberts, an inmate inside a New York prison, has been expecting the start of an outbreak, reporting from The New Yorker reads. “I have to believe it’s here. The numbers say it has to be here.” 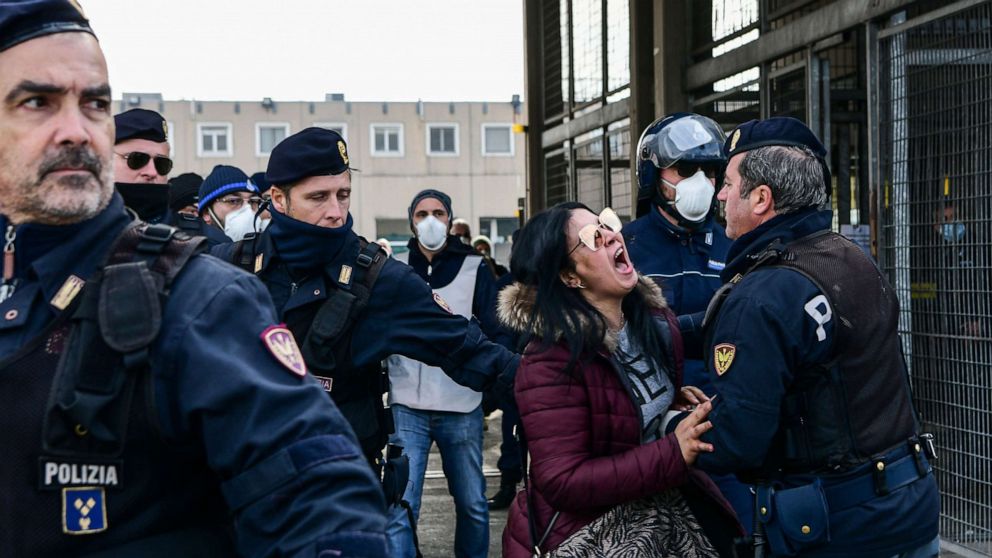 Police officers restrain the family member of an inmate outside the SantAnna prison in Modena, Italy, in one of the country’s quarantine red zones, on March 9, 2020, after new visitation, furlough and parole restrictions were imposed because of the coronavirus outbreak. (Photo by: Piero Cruciatti/AFP via Getty Images)