Top cybercrimes in the U.S.

Top cybercrimes in the U.S.

A report from McAfeee revealed cybercrime cost the world over $445 billion during 2017.

As the internet has become vital to commerce, entertainment and government, cybercrimes have been a growing tendency.

Nevertheless, its ways and forms have been equally evolving, turning cybercrimes into a billion-dollar problem, as the “Economic Impact of Cybercrime — No Slowing Down report” from McAfee and the Center for Strategic and International Studies (CSIS) revealed that cybercrime cost the world between $445 and $608 billion during 2017.

As an estimate, cybercrime is costing organizations $11.7 million each year, and if the phenomenon is not addressed, a significant spike could be visible each year, the “Cost of Cyber Crime Study 2017” shows. 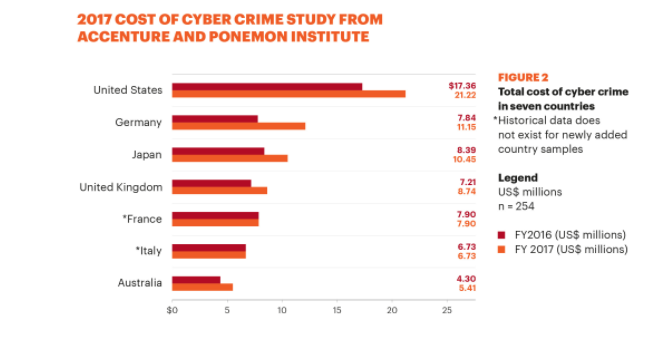 According to the IC3, the Internet Crime Complaint Center, the top reported cybercrime in the U.S. was the non-payment or delivery of a good ordered over the internet. This type of cybercrime affected more than 84,000 people in 2017 alone.

Personal data breaches and phishing or pharming scams came in second place, both hovering just above and below 25,000 complaints respectively.

Other crimes, like business email compromise or email account compromise (BEC/EAC), which are not very well known outside the cybercrime community—whereby business or personal email accounts are invaded using computer intrusion techniques to conduct unauthorized transfers of funds—is on the rise, with over 15,000 cases reported in 2017 alone.

Nearly 179 million records of data breach were exposed in the U.S. during 2017, the highest figures to date. The business sector was the most affected by data theft, as this particular sector accounted for nearly 91.3% of all exposed records in 2017.