Free fall for the US newspaper industry

Free fall for the US newspaper industry

Even though digital subscriptions have increased, the industry keeps on lacking.

Although newspapers of major circulation across the U.S. registered a notable rise in digital subscriptions during 2016, last year marked the 28th consecutive year of decline for the industry.

The overall drop that is seen in newspapers´ circulation has been caused by factors such as a 10% fall in advertising revenue, according to a recent Pew Research Center report.

However, revenue generated by circulation has maintained steady during the past years, as it rose to 10.9 billion dollars in both 2015 and 2016, contrasting to the 10.4 billion collected in 2012, nevertheless, the gains in circulation have not been able to make up for the downfall in advertising revenue that keeps up a pattern of falling in a 9% each year.

A collapse in employment across newspaper and newsroom centers have also been a considerable detail in the fall of the industry, as data gathered from the Bureau of Labor Statistics’ Occupational Employment Statistics (OES) proved that during 2015 –the last year available for the investigation– over 41,000 people worked as reporters, editors or staff in the newspaper industry, which finds a 4% plunge from 2014 and a 37% from 2004.

Digital innovation has become a top priority for industry leaders due to the amount of people connected on digital platforms, obligating them to focus on the number of subscribers than putting all forces on retaining revenue from advertising.

Even though digital visits have experienced a leverage in the past years, news is still one of the top priorities for more than seven-in-ten adults living the U.S. although 81% of these Americans get this type of news through websites, apps or social networking sites such as Linkedin. In similar analytics, out of the greatest portion of U.S. adults, 46% prefer to watch news rather than read it (35%) or listen to it (17%), establishing clearly the pathways to news and the technologic tendencies that will define the years to come for the newspaper industry. 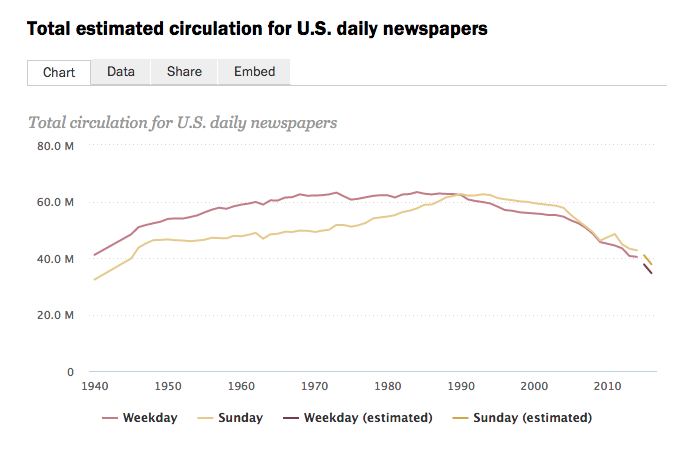 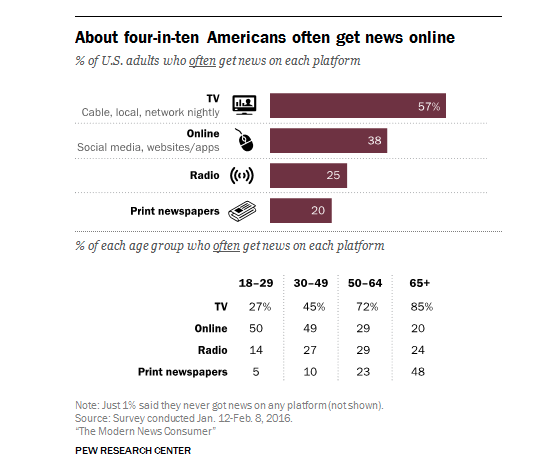