Holiday season, a challenge retailers can win… or lose

Holiday season, a challenge retailers can win… or lose

The Christmas season, which runs from November 1 through December 31, is a great boost for commerce. According to Statista, the United States’ retail industry generated over three trillion U.S. dollars for the first time during the holidays in 2013, but as years go by, business just finds a way to grow.

A recent forecast from Adobe Analytics found that the holiday season could experience a slight acceleration from the 14.7% YoY growth seen last year.

E-commerce, on the other hand, is projected to outpace the total of retail with growth between 4.3% YoY and 4.8% YoY, said the National Retail Federation.

For Thanksgiving Weekend, which runs from Thanksgiving Day through Cyber Monday and includes Black Friday, online sales are set to rise to 19%, racking up a total of $23.4 billion in US e-commerce sales in this five-day period.

Adobe also predicts that 18% of online orders will be shipped and returned over the holidays, a significant bump from the 5% rate seen year-round.

Adobe expects the period of 7 p.m. to 10 p.m. PT on Cyber Monday to bring in more online revenue than an average full day in 2018 — this because of the extreme increases in traffic and purchases.

A demand that also requires efficiency

There’s a lot retailers can win from the holiday season, but there’s also a lot they can lose.

Retailers have to make sure that their websites are able to handle a large volume of online visitors in order to avoid malfunctions and downtime that can turn into lost sales or alienated customers.

Numbers don’t lie. Retailers must capitalize if they want to secure a strong online performance for the holidays.

Data from Statista claims that in 2017, retail e-commerce sales during November and December amounted to $72.3 billion during holiday season, up from $63.1 billion in 2016. 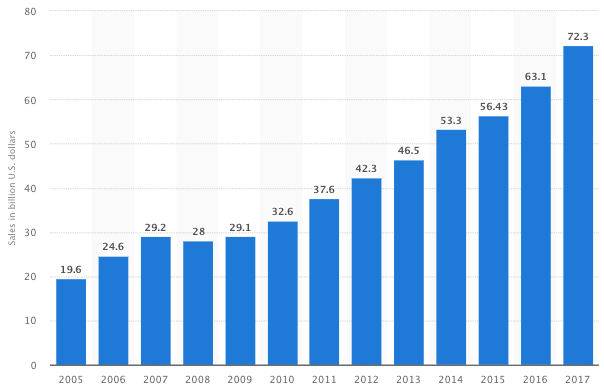