Another cyber-attack has invaded Europe.

Organizations worldwide were affected this Tuesday morning as a major cyber-attack struck large multinational companies; according to early news reports, the Ukraine government has been the most afflicted character in the situation. 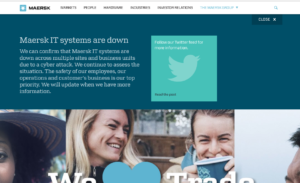 Disruption, affected computer systems and servers were announced all over the world as Danish shippings, Spanish media and French constructions declared serious platform drops, attacks and immediate measures to quickly assess the situation of which technology experts described as an “updated variant” of a malware virus that is commonly known as Petya.A or Petrwrap.

Computer files and attachments were no longer available to over 230.000 computers in more than 150 countries across the world who were hit by the Petya.A instrusion that was demanding a 300-dollar ransom in the Bitcoin digital currency.

Companies such as AP Moller-Maersk, Telefónica in Spain, German State Railways, the French Saint-Gobain, the Russian Evraz and Rosneft, as well as the British multinational advertising and PR company WPP were gravely damaged by the global cyber-attack reported, one that according to Nicolas Duvinage, head of the French Military´s digital crime unit, is the first of many, as he noted:

“We will get many of these viral attack waves in coming months.”

The invasion, security experts say, may be bigger that the Wannacry attack, which attacked various global enterprises in the past month of May, shutting and locking down computers in hospital, doctor surgeries and multi-nationals.

The continuous attacks on cyber-platforms calls and demands for improvement and innovation in cyber-defenses as companies face billion-dollar losses in currency, work-power and productivity while suffering cyber-attacks.

IT systems in several WPP companies have been affected by a suspected cyber attack. We are taking appropriate measures & will update asap.

With information from The Guardian and Telegraph.