The news media can often inspire behavior shifts, especially in times of crisis, but in today’s prolonged timeline, there are other factors driving consumer behavior transformation.

In addition to keeping us informed, the news media can often inspire quick, sometimes targeted, behavior shifts, especially in times of crisis. But in today’s prolonged timeline of crisis, there are other factors driving consumer behavior transformation.

While much broader and wide-sweeping in nature, the news cycle about the novel coronavirus (COVID-19) in the first quarter of this year sparked global purchase shifts that were clearly tied to what was being reported in the news. Sales of hand sanitizers, food staples, and cleaning products skyrocketed in step with news conferences and reports related to the spreading virus. But over time, the correlation has faded, and consumers have, in many cases, stopped responding to the news cycle with their wallets.

That hasn’t meant, however, that consumers have pulled back on purchasing fast-moving consumer goods (FMCG). Their purchasing just no longer mirrors media reports about increasing rates of virus transmission. Even in countries that have experienced fresh or ever-growing outbreaks of the virus, such as the U.S., Brazil and Russia, FMCG purchases remain relatively steady. And in some instances, increased FMCG purchasing has correlated with momentary factors beyond the virus itself, such as local business re-openings and changes in restricted living conditions. 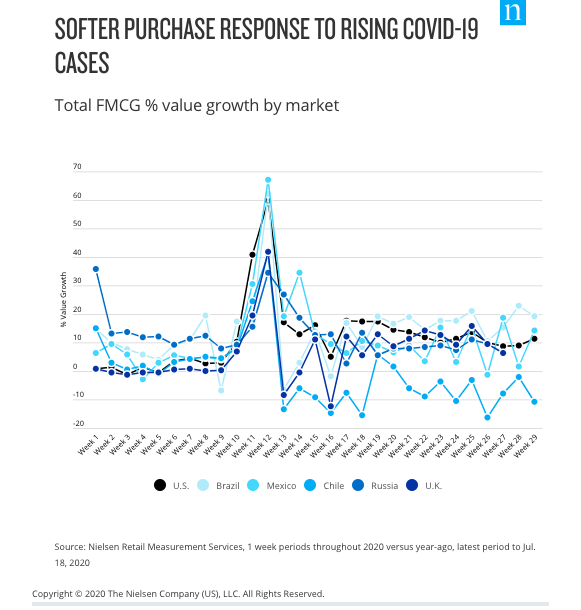 Nielsen Intelligence Unit leader Scott McKenzie highlights why it’s important to get ahead of these expected consumer responses. “Consumer behavior is spinning in fundamental ways right now,” he says. “The unique macro conditions of a pandemic driving economic recession are forcing consumers to rethink how they shop and what they buy.” And Nielsen data shows that changes are already unfolding in households across the world. McKenzie adds, “Habits are changing in days and weeks. Typically, we, as humans, have months or years to adjust to new conditions. But that’s no longer the world we live in. The implication for brands trying to meet the new needs of consumers is that they must be very focused and very fast in their response.”

In the U.S. for example, the links between virus transmission and purchase behavior are beginning to fade at the local level. Topline sales growth trends in various U.S. locations show similar peaks and valleys throughout recent weeks, despite each area having drastically different local instances of COVID-19 cases. In fact, weekly FMCG sales growth rates throughout June in the Miami and West Palm Beach areas of Florida were very similar to the growth rates witnessed in the relatively steady Hartford and New Haven areas of Connecticut, averaging just over 10% sales growth, respectively, over the six weeks through to July 18. Meanwhile, the two U.S. states couldn’t look more different in terms of local COVID-19 impact, as reported by each state’s Department of Health: The state of Florida had exceeded 430,000 in total confirmed COVID-19 cases as of July, whereas the state of Connecticut had fewer than 50,000 total confirmed cases.

There is some correlation between actions at the local level and purchase behavior, but the impact of the actions is typically short lived. For example, we saw a 20% increase in FMCG sales in the Los Angeles area in the four weeks that followed the start of business openings in early May. The extent of upticks sparked by business openings or re-instituted living restrictions, however, has not typically lingered beyond a few weeks, and in the case of Los Angeles, the rate of increase remained just a fraction of what was witnessed at the onset of pandemic lockdowns, when sales growth peaked at 79% in late March.

On top of changing habits, future socio-economic consequences are weighing much heavier on spending decisions, and the impact across consumer groups isn’t equal. Constrained spenders, or those whose incomes have been negatively impacted by COVID-19, will spend to survive, compared with insulated spenders, who may adjust situationally even though their incomes remain unchanged by the pandemic.