Disney has unveiled its streaming service, marking the official start of the streaming wars.

The Walt Disney Company has unveiled its family-friendly streaming service with TV shows and movies from some of the world’s most popular entertainment franchises in a bid to challenge the digital dominance of Netflix.

This new platform SVOD service (subscription video on demand) is available for $6.99 a month or $69.99 per year. It redirects users to designated areas for the company’s various franchises like Disney, Pixar, Marvel, Star Wars, and National Geographic. This digital push of Disney is also set to rattle the market as it announced an ad free approach, breaking with Hulu and ESPN+’s ad-supported models. Disney+ will be available to stream through smart TVs, web browsers, and on tablets, mobile devices, and game consoles as it secured deals with Roku and Sony for availability on their respective platforms.

As for new projects, the mouse-house has already confirmed series based on Avengers characters like Falcon (Anthony Mackie) and Winter Soldier (Sebastian Stan). Two other live-action projects focused on Loki and Hawkeye have also been secured by Marvel Studios. Monsters, Inc. and High School Musical will also see new productions, as well as Star Wars with the creation of The Mandalorian. A remake of Peter Pan, Lady and the Tramp, The Sword in the Stone, which is slated for a Disney+ release, is also in the works.

The Hollywood Reporter previously reported that Disney would launch its streaming service with “500 films from the Disney library … in addition to around 7,000 episodes of Disney TV.” According to The Verge, Netflix had over 4,000 movies and 1,197 TV series in 2016. Bob Iger, CEO of Disney, told investors in November 2017 that they were planning to “walk, not run” into streaming, but they would ramp up production on original series and films over time. If you want to see The Mandalorian, for example, you’ll have to sign up for Disney+.

It’s the most important product launch in Iger’s 15 years as CEO, and it’s also the riskiest, according to BusinessWeek. Disney has promised the family-focused streaming service will feature at least 25 new TV shows and 10 new movies in its first year, along with a huge archive encompassing everything from Mickey Mouse’s first appearance, in 1928’s Steamboat Willie, to the contemporary adventures of The Avengers to the interstellar Star Wars canon.

Bob Iger built his reputation with 10-figure purchases that turned Disney into Hollywood’s most successful movie company: Pixar in 2006, Marvel in 2009, Lucasfilm in 2012. This year, he cemented Disney’s hegemony by spending $71 billion to buy much of 21st Century Fox. But for all its production might, Disney doesn’t have a deep technology background like its primary streaming competitors Amazon, Netflix, and Apple, which introduced its own service on Nov. 1. And unlike these companies, it has little experience selling productions directly to consumers.

Disney+ could define Iger’s legacy. Now 68, he’d been scheduled to retire this year. Instead, as part of the Fox deal, he agreed to stay on until 2021. He professes certainty that Disney+ is the right step. “It feels absolutely vital for us to do this,” he says. “This is, no question about it, the future of media.”

Breaking down the rise of Disney+

According to Business Insider, these are some of the key insights surrounding the importante investment the mouse company has made for Disney+:

The digital push is Disney’s response to cord-cutting, the dropping of cable service that has hit its ESPN sports network and other channels, the rise of Netflix Inc., and the need to not feel left out of a market at a time when audiences are facing a host of choices, and monthly bills, for digital entertainment.

Disney touts 95% brand awareness and a fan base of over 1 billion, even debuting as America’s most intimate brand in the 2019 Brand Intimacy Study by MBLM.

Let’s see what the future holds for the Mouse House as it pushes competition into streaming to take on competition from Netflix, Amazon, and Apple. We can at least expect to reach many of its targets sooner than later as original and exclusive content have been seen to be the differentiators in this market.

WarnerMedia recently unveiled its much-talked-about direct-to-consumer streaming service, confirming it will be called HBO Max under a new deal with Warner Bros. Television. It is set to launch in the spring of 2020 with some 10,000 hours of content, including all episodes of ’90s hit “Friends.”

In March, Apple announced its own streaming service: Apple TV+.

Amazon, the world’s largest Internet retailer, has Prime Instant Video, which, similar to Netflix, offers commercial-free shows and movies at the viewer’s whim, and already presumes over 10 million users. According to new estimates, Amazon’s Prime Video Channels will pulled in $1.7 billion in revenue during 2018, more than double from last year’s $700 million. That number is poised to grow to $3.6 billion in 2020 worldwide.

Hulu recently updated its interface, resulting in a quick interface and ability to incorporate premium channels. 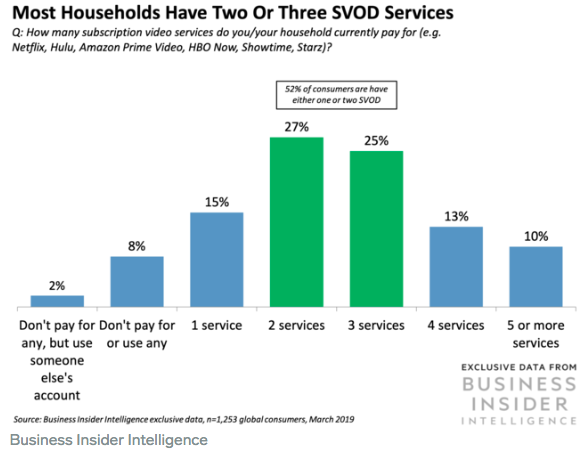