Tesla of the seas

Tesla of the seas

The world´s first autonomous cargo ship is set to sail in 2018.

Two Norwegian company´s are planning to give life to the world´s first self-driving cargo ship, much like a Tesla but of the seas. 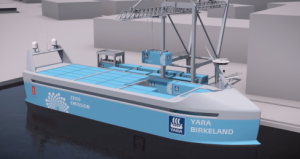 Yara International and Kongsberg Gruppen, who build have teamed up to lead the race of creating a crewless, auto-managed cargo ship capable of floating around other boat traffic and dock by itself, an ambitious project that has the name of Yara Birkeland which will demand a 25 million dollar inversion.

Despite being a ship, the specific of driving autonomously is what gave it the nickname of “Tesla of the seas”.

The ship´s infrastructure is planned to cut operating costs in the industry for up to 90%, as it can operate without the use of fuel or a trained crew while supporting up to three times as much as a conventional container, reducing emissions and introducing a new culture of cleaner fuels when sailing populated coastal areas across the U.S. and Europe.

Tesa leads the age of autonomous

Autonomous technologies designed for ocean use are on the rise, creating a brand new and competed market that is still awaiting it´s industry leader, so it seems Norway is the leading country on the route to an environmental friendly technological advance.

Delivering under extreme conditions are one of the strongest promises both Yara and Kongsberg have as international technology groups, nevertheless, these types of launches require a showroom of innovation breakthroughs that can change the autonomous landscape as we know, having already the examples of Tesla, Qualcomm and Autoliv, for example, who have already changed the game as we know it.

The Yara Birkeland is set to sail fully operating by late 2018, and while the bar is set high, there is still much to be heard from the competition as they lurk to conquer major intercontinental routes by sea through autonomous sailing.