The government can do better

The government can do better

Americans aren’t thrilled with their own government’s coronavirus response.

Just 47% of respondents said to a recent Pew poll that the US has done a good or excellent job managing the emergency situation created by the novel coronavirus pandemic. Americans even give higher ratings to South Korea and Germany than U.S. for dealing with COVID-19.

According to Pew Research Center, Americans largely agree the U.S. should look beyond its borders for ideas to combat the coronavirus. Nearly half (46%) say the U.S. can learn a great deal from other countries about ways to slow the spread of the virus, while another 38% say it can learn a fair amount. Few say there is not too much (13%) or nothing at all (3%) the U.S. can learn from other countries. There’s more agreement, however, when it comes to information from the Chinese government: 84% of Americans say they place not too much or no trust in information from Beijing regarding the coronavirus outbreak.

The online conducted survey, conducted by members of Pew Research Center’s American Trends Panel, 42% of Americans say the U.S. does too much to help solve world problems, compared with smaller shares who say it does too little (28%) or the right amount (28%). 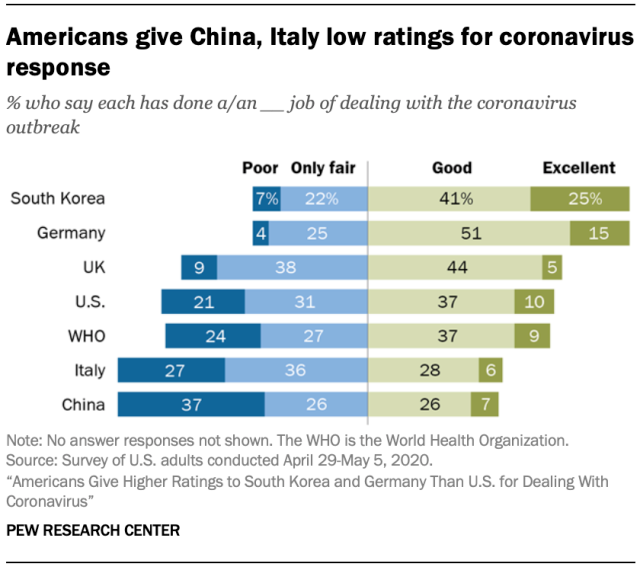