“I am both impatient and disgusted by the fact that as a nation, we seem to be placated by the passive discussion of ‘why’,” reads the message to General Motors employees, suppliers and dealers. Why does this happen? Why can’t we get to a different place? Why is the response so visceral?”

Through a statement titled “There is a Big Difference Between Seeing What’s Wrong and Doing What’s Right”, posted on the company’s internal intranet and then distributed to thousands of GM dealers and suppliers on Monday, according to a GM spokesman, per CNBC, the General Motors leader shared her concern and vision regarding the racism that continues throughout the United States.

“The recent deaths of George Floyd, Ahmaud Arbery and Breonna Taylor astonishingly add to the important and unconscionable list of black Americans who have lost their lives based on the color of their skin (…) let’s stop asking why and start asking what we can “do – individually and collectively – to drive change … meaningful, deliberate change. As one of the largest global companies, there is much we can do.” She added that the company is commissioning an “inclusion advisory board” of both internal and external leaders, which she will chair.

“Putting this in writing is not enough,” she wrote. “In addition to affirming the above principles, we are taking immediate action.”

Barra and CEOs of Detroit’s nine largest corporations publicly committed to rejecting all forms of racism, sexism and violence and committed to supporting reforms for a fairer criminal justice system. According to The Detroit News reporting by Breana Noble, the top executives from companies like Ford Motors, Ilitch Holdings, DTE Energy,  FCA North America, and others, gathered with Anthony and Mayor Mike Duggan following five days of mostly peaceful demonstrations in the city protesting racial disparities and calling for justice in the death of George Floyd.

“We stand up against injustice — that means taking the risk of expressing an unpopular or polarizing point of view, because complacency and complicity sit in the shadow of silence,” said CEO Mary Barra.

Wednesday’s news conference — a product of Duggan’s calls Tuesday to the nine CEOs — marked their first time addressing the issue publicly for many, including Detroit’s three automakers, The Detroit News adds. 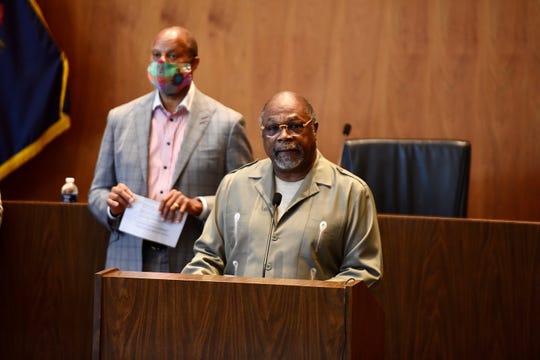 They all jointly agreed to four commitments, these are: