The fastest and leading gains in construction productivity are based in China.

Berlin’s airport is an extreme example of a broader problem: its construction went six times over budget and the project had 66,500 building mistakes that needed to be fixed. 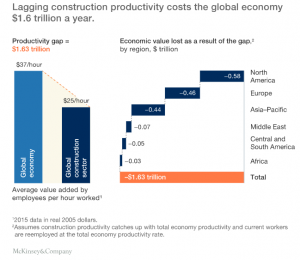 Many construction projects, especially in the U.S., suffer from overruns in cost and time.

The project holds the dubious honor of having the lowest productivity gains of any industry, according to McKinsey.

In the past 20 years the global average for the value-added per hour has inched up by 1% a year, about one-quarter the rate of growth in manufacturing.

Leading gains are not seen everywhere

Over the same period Germany and Japan, paragons of industrial efficiency, have seen nearly no growth in construction productivity.

In France and Italy productivity has fallen by one-sixth. In America, astonishingly, it has plunged by half since the late 1960s.

Apple’s new headquarters in Silicon Valley opened two years behind schedule and cost US$2 billion more than budgeted. One survey of British architects found that 60% of their buildings were late.

The fastest and leading gains are in China. Labor productivity is racing ahead at 7% a year, albeit from a low base. WinSun, a construction company, has built apartment flats using 3D printing.

Modular building is also on the rise, with one company erecting a 57-story tower in 19 days.