Creating a leaner energy business to serve the community

Creating a leaner energy business to serve the community

When Patti Poppe took over as president and CEO of CMS Energy Corporation in 2016, the company was coming off 13 years of consistent financial and operational excellence, leaving her with the challenge of taking an organization that was already close to best-in-class in many areas of its operations to an even higher level of performance.

It was a challenge she eagerly welcomed.

“When I met with the board prior to my appointment and they asked what my plans were, I think they were hoping I’d say that nothing was going to change,” Poppe says. “But as an insider at the company, I saw tremendous opportunities, particularly in the realm of improving our customer experience and my co-workers’ ability to deliver on that experience while reducing cost.”

Based in Jackson, Michigan, CMS Energy is an energy company that is mainly focused on utility operations in the state of Michigan.

Its principal business is Consumers Energy, a public utility that provides electricity and natural gas to more than six million of Michigan’s 10 million residents.

In 2017, CMS enjoyed its fifteenth consecutive year of consistent financial performance with $6.6 billion in revenue. 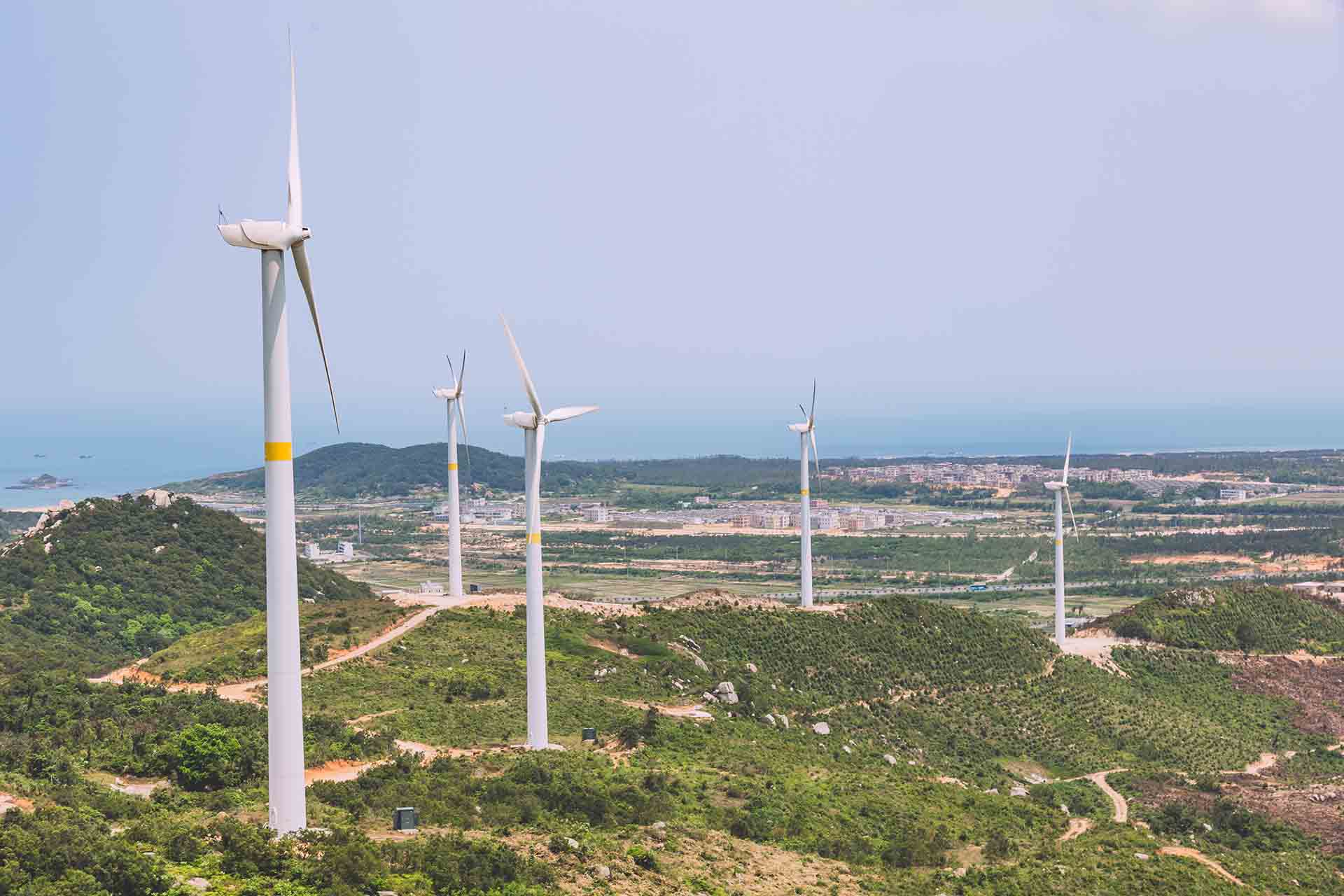 Yet while CMS Energy operates across the US, for Poppe, serving the local community in her native state of Michigan is the most crucial part of the company’s mission and purpose, one reflected in the fact that many of its staff make their living by delivering energy to friends, family, and neighbors, including those of Poppe herself.

“When I say this, I mean it literally, my Dad lives just next door. Our business is like that. We really do take pride in serving the people of Michigan.”

A plan for the future

Upon taking her current role, Poppe immediately went about looking to the future, and her vision for the company has proven to be a fruitful one.

Guided by the Consumers Energy Way, a newly implemented operating system, CMS Energy has gone about retiring its older, fully-utilized coal facilities and is currently in the midst of replacing them with cleaner, renewable resources, such as the 111-megawatt Cross Winds Energy Park facility which began construction in 2014 and has brought new jobs and other economic benefits to the immediate area and beyond.

“The CE Way is a classically lean operating system that has really built on our previous strengths, but also created a platform for continuous improvement going for- ward,” Poppe stated. “I truly believe that we are uniquely positioned, for a couple of reasons. One, we have the lean mindset, and I don’t think that’s prevalent in our industry yet, and two, it eliminates a lot of waste that’s inherently built into this huge infrastructure with which we work.”

Furthermore, by freeing up capital, the company is looking to invest in its natural gas delivery business by building and renewing pipelines, including the $610 million Saginaw Trail pipeline currently being upgraded in the Lower Michigan region. At the same time, investments are also being made in technology to enable CMS Energy to become a leaner, more efficient organization still.

“Right now, our electric system, particularly in the US, and specifically in Michigan, is designed to serve a peak load which occurs a couple of hours a year, and so unlike many other kinds of manufacturing businesses, we have a dramatic oversupply and overcapacity just to serve that peak, because we’re retiring that supply right now, we have the opportunity to replace it with less, at least partly by leveraging technology, such as smart thermostats and grid management devices, and data analytics.”

“For example, when we installed our smart meters across our entire system, we not only utilized the technology, but also changed the actual work process, as well as the billing practices and eliminated millions of dollars of waste and defects in our system,” Poppe added.

When talking about CMS Energy’s commitment to customers and shareholders, Poppe refers to what she calls a triple bottom line of people, planet, and profit, and she believes these three aims can co-exist.

As an example, she describes how the Consumers Energy Way team recently conceived of new, more sustainable ways to dis- pose of water on gas pipeline projects by utilizing state-of-the-art mud reclamation equipment to recycle the water back into the ground and leave it cleaner than before.

As part of its broader commitment to the environment, CMS Energy recently made a public commitment to reducing its carbon footprint by 80% in the coming years, a goal it aims to surpass by retiring its coal facilities a decade earlier than recommended by the global science community. 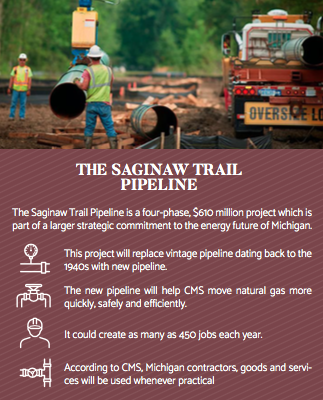 “We know that sets us apart from our peers and really is very attractive to both investors and the people we serve here in Michigan.”

On the way CMS Energy interacts with its work- force, many of whom hail from the very communities the company serves, Poppe was also keen to stress the importance of the company’s roots in Michigan.

“The overarching theme for CMS Energy is our purpose, which is World Class Performance Delivering Hometown Service, in order to be world-class performers, we rely on our lean operating system, but it’s delivered by my co-workers who are an extraordinary group of people.

A portion of my workforce is represented by the Utility Workers Union of America, and I can ensure you that our performance is better because of them.”

CMS Energy is able to deliver such reliable service because of key partnerships with fellow electricity providers, which, above all, are necessary when demand exceeds supply.

Poppe points to the challenge presented by peak workload increases during extreme weather conditions in Michigan which the company manages through an incident command structure it shares with such partners to respond quickly to customers in moments of crisis. 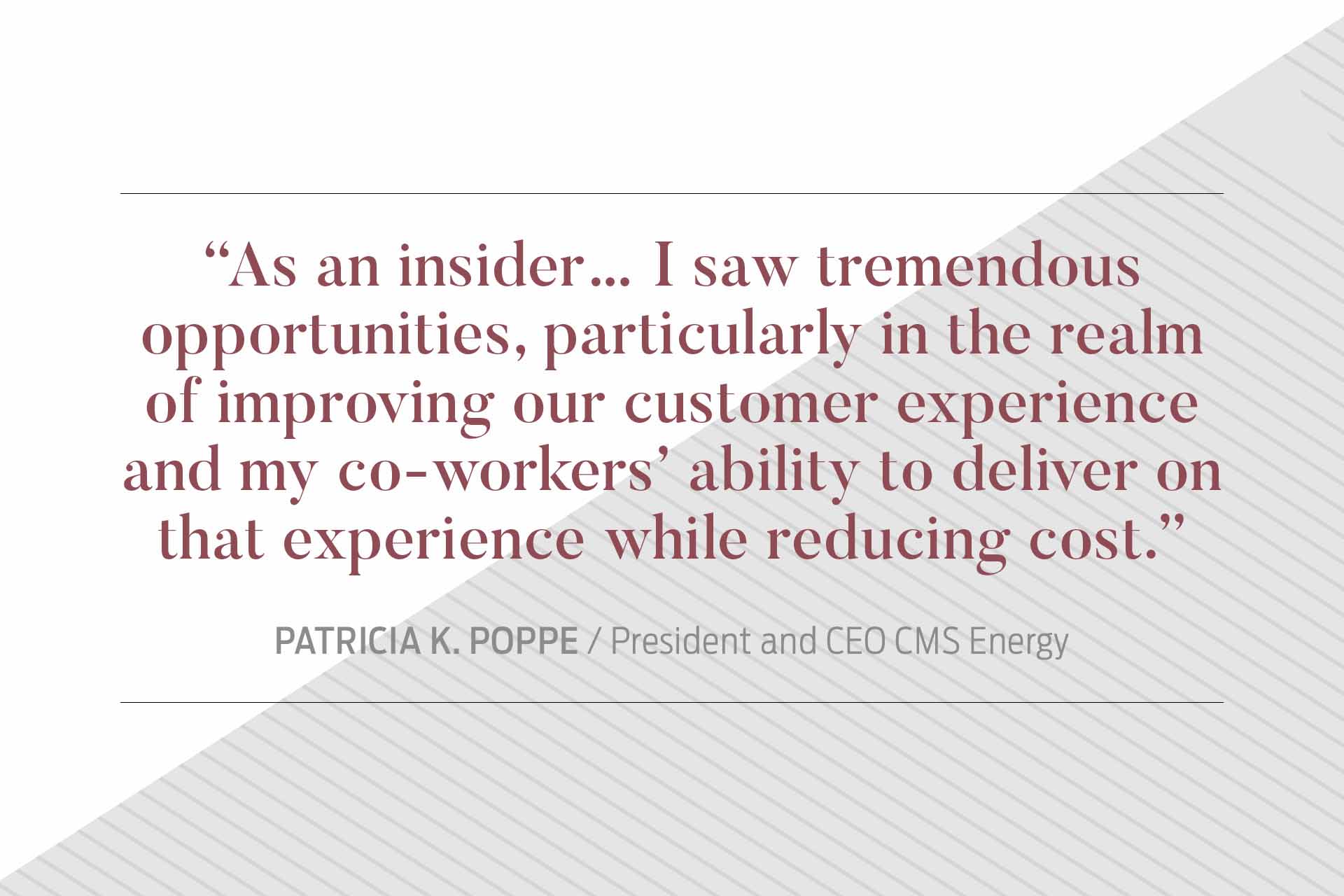 “Peak workload for an electric utility happens when we have an ice storm or high winds,” she explained. “We can’t staff up to serve those peak moments so we have a core group of electric contractors who are extremely important to us. They can plug right into our system, because we designed it together. As a result, we have had some significant weather events where major restoration was required and those strategic partnerships enabled us to receive national recognition for responsiveness.”

Indeed, CMS Energy has repeatedly been recognized for the quality of its service, and its values.

In July 2018, an independent national survey by market research and consulting firm Market Strategies International named CMS Energy the most trusted utility brand in the Midwest and Top 15 in the country.

In February of the same year, Forbes ranked Consumers Energy as Best Employer for Diversity in Michigan where it was the only utility company among the Top 100.

Yet, Poppe is particularly proud of the company’s safety record.

Consumers Energy has been recognized as the safest company in the utility industry, and also received the Dr. Charles Drew Lifesaver Award from the American Red Cross for its dedication to emergency first response training—a commitment she believes is shared by her company’s most valued partners.

“Our employees work very closely with our contractors on the system, which means our partners are working equally safely alongside us, because of these trusted relationships and our leaner operating system, we’ve never served our customers better than we serve them today.”