A home for top corporations

A home for top corporations

Being home to major corporations helps the U.S. economy boom.

Since the beginning of the 1900’s, America has been home to many of the world’s top corporations. 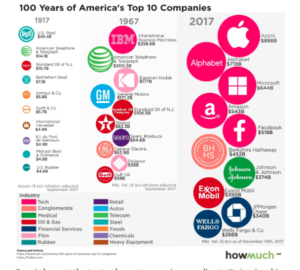 A Century of America’s Top 10 Companies, in One Chart.

Whether it be tech, medical, oil & gas, financial services, film, auto, rubber, retail, foods or some other industry, the U.S. has been home to major companies such as IBM, AT&T, General Electric, Facebook, Amazon, Exxon Mobil, Wells Fargo and others.

In 2017, according to a HowMuch graphic, Wells Fargo, which is the company with the smallest market value among America’s top ten corporations, registered $266 billion USD as of November 10th, 2017.

Apple, the highest of the top ten rank, made $898 billion USD as of November 10th, 2017. Alphaber, Microsoft, Amazon, Facebook, Berkshire Hathaway, Johnson & Johnson, Exxon Mobil and JPMorgan Chase are the other 8.

The diversity of corporations

The United States is far wealthier now than it was 50 or 100 years ago.

Companies today are significantly larger and worth more than the largest companies ruling the market in 1967 and 1917.

According to the HowMuch.net comparative chart, AT&T is the only company to repeat in America’s top ten corporations in 1917, 1967 and 2017.

Business is set to shift in the near future, who do you think will beAmerica’s top ten corporations in the coming years?