More than a utility company

More than a utility company

Despite becoming the second largest utility firm in the US, CEO Tom Fanning believes Southern Company has achieved much more.

Significant change has swept through Southern Company, the US’s second largest utility company, since Tom Fanning took the helm in 2010.

Among its recent projects and achievements, the Atlanta-based firm has increased its investments in nuclear, renewables, and natural gas, built a generation fleet roughly the size of Australia in terms of energy production, and transformed itself into a low-to-no carbon enterprise by reducing its energy derived from coal from around 70% when Fanning took the helm to 22% today.

“The most important thing in the last few years was that we had to sit down and think about the success we had experienced,” Fanning told CEO Magazine in an exclusive interview. “One of the greatest harbingers of future failure is past success. On the one hand, you want to maintain this terrific, iconic company and its performance, and on the other, be able to attack that model and think about how to position the company so that it’s resilient in terms of its service to the communities, customers, employees, and shareholders of the future.”

Southern Company is an American gas and electric utility holding company based in the southern United States. It is headquartered in Atlanta, Georgia. The company is currently the second largest utility company in the US in terms of customer base. Through its subsidiaries, it serves 9 million gas and electric utility customers in six states with 44,000 megawatts of electric generating capacity and 1,500 billion cubic feet of combined natural gas consumption and throughput volume.

“I think we’re as well positioned as we’ve been in decades,” Fanning stressed when asked about the company’s current fortunes. “When you consider that we’ve been the No. 1 total shareholder return company over the past year, I think that Wall Street is starting to see the fruits of our efforts. Likewise, this is the best year we’ve had in generation and transmission performance. I also think we’ve been a really effective voice in energy policy and moving the nation forward from an environmental stakeholder standpoint.” 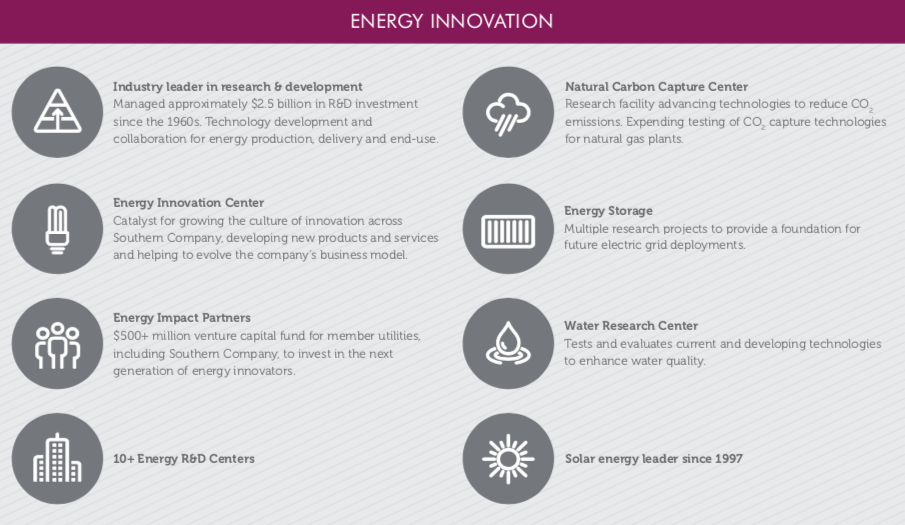 While Fanning insists that Southern Company’s principal responsibility is to continue serving its customers as well as always, he is all too aware that in a rapidly evolving industry the old business models that America has depended upon over the past century may not be suited to a changing future. As such, Southern Company is keenly embracing new technology, from solar energy to the concept of microgrids.

“If you think about the way the electricity industry works, it is essentially about making, moving, and selling energy,” Fanning highlighted. “Traditionally, it’s been done largely through central stations, or generating plants, and cross country transmission lines. Yet we’re starting to see an evolution of that model and the emergence of something I call distributed infrastructure. That’s to say, we will take the central station model, miniaturize it, and put that continuum of infrastructure on customer premises. Maybe that’s Home Depot, maybe it’s the Department of Defense, but it’s mostly centered on commercial and industrial applications for the near term. It’s a very exciting future.”

“Our company has developed a position of market share of microgrids in the US of about 85%. When you think about miniaturizing this model, that seems to compete with the businesses that we’ve known and loved for over a hundred years. But I think you can look at this change as inevitable. What I always like to say is, ‘You can’t keep the waves off the beach.’ You can either play defense or you can try to influence, help to invent that future. My sense is that our businesses are always better when we can play offense. Our people get energized from that.”

Tom Fanning believes that a number of factors have conspired to turn Southern Company into much more than simply a hugely successful utilities company. From collaborating with the US Department of Defense on issues such as cyber and national security to joining forces with JPMorgan Chase and AT&T as a member of the Tri-Sector Executive Working Group—a public-private partnership that facilitates and integrates a collaborative approach to risk management through prioritization, planning, and response across the financial services, communications, and electricity sectors—the company has always kept one eye on the broader economy and both the national and global picture.

Fanning himself sits on the US Cyberspace Solarium Commission, a group launched by the US government in May 2019 with 14 members, including four executive branch leaders and a bipartisan mix of four House and Senate law-makers, with a view to determining what role the public and private sectors should play in securing the nation’s information infrastructure, how the DoD should address cyberattacks from foreign nations, and how America and its allies should promote and enforce government norms in cyberspace.

“When you think about the major economic sectors in our country, pulling together the interests of electricity, finance, and telecoms has been particularly important, as well as how we create new models of collaboration between the private sector and the federal government,” Fanning elaborated. “All these are big issues that Southern Company is leading on.”

The importance of collaboration

With franchises businesses across the US Southeast and elsewhere in the country, independent power assets from the Carolinas to California, a major natural gas pipeline, and its burgeoning microgrid business across the nation, Fanning believes in bringing together diverse voices from across the company to participate in decision making.

“For all the brilliant ideas any individual will have, we’re always better for our system of collaboration,” Fanning told CEO Magazine. “You never define success through yourself. You must define success for the enterprise as being bigger than yourself. It isn’t yourself, it’s your family. It isn’t yourself, it’s the community. It’s not our business, it’s our industry. It’s not our industry, it’s the United States and the global economy.”

“In terms of my personal performance, I think you can see that philosophy in three spheres,” he elaborated. “One, I’ve really endeavored to be a leading voice in energy policy. Two, I’ve always had an interest in the broader economy. I was at the Atlanta Fed for six years and Chair for three. I’ve also chaired the advisory group to the Big Fed in DC for a year. The third sphere is the idea of national security. I think I’m the only CEO in our industry who was previously a CIO. That background has helped me think through the national security issues and the existential threats that affect America today.”

A one of a kind company

As previously stated, Southern Company has long moved beyond traditional electricity production and distribution into the fields of natural gas and renewable energy, notably solar, and invests heavily in its own R&D area to work on delivering innovative energy solutions for decades to come. The lead director of Southern Company’s R&D department is currently a former CEO of the non-profit Electric Power Research Institute (EPRI), the US’s leading research body into the generation, delivery, and use of electricity.

“We’ve always felt that exposure to natural gas is particularly important,” Fanning said. “In 2015-16, we became, through some acquisitions, the largest consumer of natural gas in the US. I used to say that natural gas was a bridge to 2050. I now believe that we can reach a low-to-no carbon future through the development of carbon capture technology and storage much sooner. We still believe nuclear will be a dominant solution. Furthermore, Southern Company had virtually zero renewables before I became CEO. Now, about 11% of our energy mix is due to renewables. At one point during my tenure, we were the biggest owner of solar in America.”

With a string of key acquisitions adding to this integration process—such as that of AGL Resources, the largest local natural gas distribution company in the US, in 2016, and a 50% stake in the Southern and Natural Gas Pipeline (SONAT), as well as long-term service agreements with GE and many other major equipment suppliers—Fanning was far from reticent on what continues to set Southern Company apart in the utility field.

“I think we are the best example of risk-adjusted return in the US,” he insisted. “We offer reasonable returns and very low volatility. When you think about the demographics of America as we get older, when there are so many risky asset portfolios, a company like Southern Company is greatly needed. When you think about the makeup of America, that kind of investment is right in people’s strike zones.”