Still a home to migrants… despite everything

Still a home to migrants… despite everything

The United States is still home to the majority of international migrants worldwide.

There were 258 million international migrants in the world during 2017, according to the most recent “International Migration Report” of the United Nations (UN), and the United States is home to 49.8 million of them.

The same UN report confirms that India was the maximum issuer of migrants in 2017, with 16.6 million, followed by Mexico, which saw migration to 13.0 million people last year.

Russia, on the other hand, practically saw migrate the same number of people it saw arriving, as 10.6 people left the country, but it became home to 11,7 million. 10 million people migrated from China, 7.5 from Bangladesh; 6.9 from Syria; 6.0 from Pakistan; 5.9 from Ukraine; 5.7 from the Philippines; and 4.9 from the United Kingdom, who also repeats on the list.

The number of international migrants around the world has grown faster than the global population. This growth rate increased the number of migrants from 2.8% in 2000 to 3.4% in 2017.

The proportion of migrant women decreased from 49% in 2000 to 48% in 2017; female migrants outnumber men in Europe, North America, Oceania, Latin America and the Caribbean, while in Africa and Asia, particularly in Western Asia, male migrants predominate. 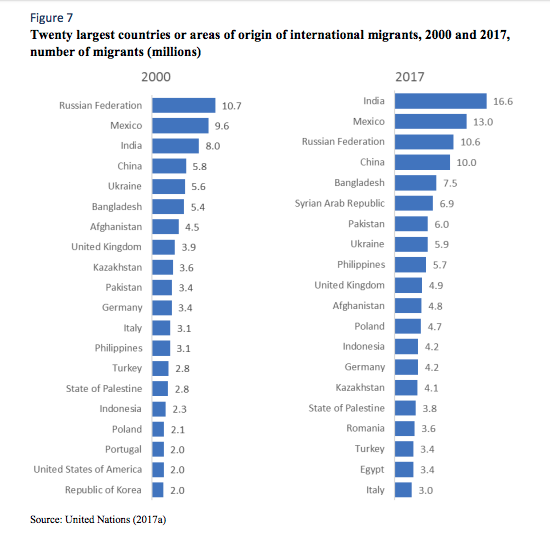