The art of coming back

The art of coming back

On 1st August 1976, the German Grand Prix was held at the Nurburgring, there, Austrian driver, Niki Lauda, aimed to crown a wonderful season he had dominated so far in his Ferrari 312 T2 at the expenses of James Hunt and the McLaren.

As rain shower fell over the track just before the race, Lauda had chose rain tires to start competing, but this decision cost him lots of time, losing places to those who had opted for slicks, this made him stop and change his set to make up for lost ground, but then, as his still cold tires managed little grip on the damp road, he had that terrible accident at the Bergwerk curve where Lauda lost control of the car, hit the bank at the side of the track with his helmet missing, having been ripped off in the impact, and ended up at the other end of the track inside a burning cockpit as the car caught fire when fuel leaked out in the first impact.

Fellow drivers Harald Ertl, Guy Edwards and Brett Lunger stopped and quickly acted doing what they could to help Lauda, but it was ultimately Arturo Merzario who pulled him out of the flames, saving his life. The Austrian, world champion one year earlier, was in serious condition. The poisonous fumes he had inhaled were lethal, forcing him into intensive therapy and painful and specific procedures to get him back to normal.

Many believed the accident would result in his death, but it was actually what forever immortalised him in the Formula One history. 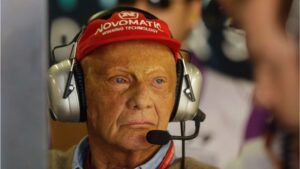 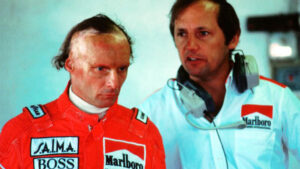 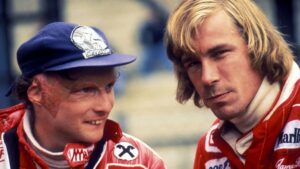 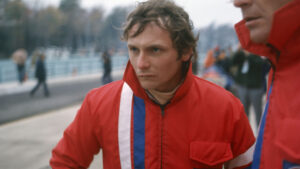 Austrian racing driver and aviation entrepreneur Niki Lauda has died, aged 70. . The three-time Formula One world champion was also a pilot, and following his successful racing career Lauda went on to set up two airlines. He recently became a non-executive chairman for the Formula 1 Mercedes team. . Lauda will be remembered by many for his remarkable comeback after being badly burned in a crash in the 1976 German Grand Prix. . PHOTO: "Tribute to James Hunt Day". Nikki Lauda arrives at the event piloting his own helicopter. Brands Hatch. England. November 7, 1976. . © @peter_marlow/#MagnumPhotos . #NikiLauda #FormulaOne #PeterMarlow #portrait