These CEOs are speaking up to protect the dream of undocumented immigrants brought to the U.S. as children.

In September, the Trump administration formally announced the end of the DACA program. 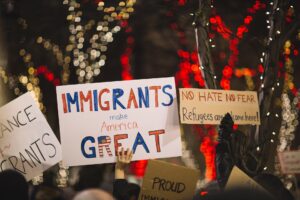 The Center for American Progress (CAP) stated that every month, 30,000 workers could face loosing their jobs over-time, resulting in a 460.3 billion dollars deficit in economic output over the next decade in the U.S.

By doing so, nearly 800,000 young undocumented immigrants –commonly known as dreamers– who were brought to the U.S. at a young age are vulnerable to deportation, however, a 460.3 billion dollars deficit in economic output for the country is also lurking ahead.

The controversial decision made CEOs jump out of their seats to write a letter and defend the program that generates over $6.3 billions in employee turnover costs.

Nevertheless, one of those leaders took an extra step to defend DACA, and that was Jeff Bezos, Amazon CEO, who recently donated $33 million alongside his wife to an organization called TheDream.Us that provides scholarships for dreamers, the largest amount in the organization’s history.

Jeff and MacKenize Bezos´s money could fund 1,000 scholarships, a meaningful extra as dreamers are not eligible for federal financial aid.

As a son of a Cuban immigrant, Bezos understands clearly the sacrifices dreamers must face to fulfill their ambitions and dreams.

Through a statement, the Amazon leader explained his fathers origin to which he based his generous dreamer donation:

“My dad came to the U.S. when he was 16 as part of Operation Pedro Pan.” “He landed in this country alone and unable to speak English. With a lot of grit and determination — and the help of some remarkable organizations in Delaware — my dad became an outstanding citizen, and he continues to give back to the country that he feels blessed him in so many ways.”

How does TheDream.Us work?

TheDream.Us is a nonprofit working toward college access for dreamers that has partnered up with 74 colleges and universities like the University of Washington and Arizona State to grant dreamers the ability to attend college.

Dreamers attending college under the program receive $33,000 in scholarship aid over four years. There are currently 2,850 enlisted.

Thank you, Jeff and MacKenzie Bezos, for the biggest grant in our history. Because of you, 1000 #DREAMers will be able to go to college https://t.co/F6W1pgloOH

It's against our values to turn our backs on #DREAMers. Everyone deserves a chance to work, study and contribute – the #AmericanDream!

Dreamers belong in our country, our companies and in our communities. I’m proud to support them https://t.co/VNud3AcytU