The eyes of Europe on the US election

The eyes of Europe on the US election

Europe isn’t interested in the outcome, rather than in the conduct of the vote itself.

In Europe, home to some of Washington’s longest-standing allies, many are questioning or have doubts about the American political process that is warming up to fully blow in November. According to a new YouGov survey of seven European countries (France, Britain, Spain, Germany, Italy, Sweden, and Denmark), people are interested not only in the outcome of the election, but in the conduct of the vote itself.

The data shows Trump performs best in Italy, but even here the 20% who want him returned for a second term are outnumbered almost three to one by the 58% who want Biden to win. Denmark is where a victory for the Democratic challenger is most strongly desired, with 80% wanting him to see win compared to only 6% for the Republican incumbent. An overwhelmingly majority strongly desire a victory for the Democratic challenger, but are less sure that a Biden victory will come to pass. Nevertheless, in every European country that was surveyed, people are seeing better process among the Democrat campaign. 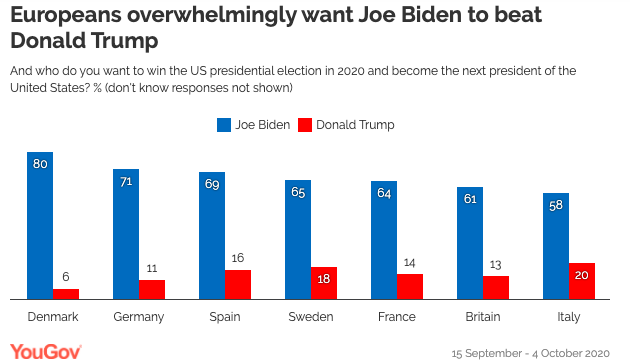 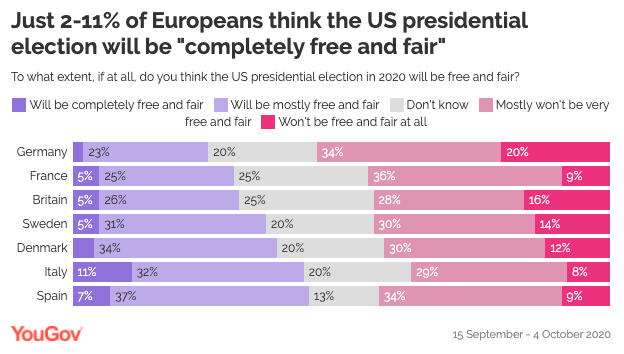 Fairness, honesty and impact to the rest

When asked if they think the US presidential election will be “completely free and fair”, no more than 11% of people in the seven countries expect the election to be “completely free and fair”, with Britons, French, Germans and Swedes noticeably more likely to think the election won’t be particularly free and fair than think it will be, while the Danes and the Spanish are split and Italians are slightly more likely to think the democratic process will be robust. When it comes to honesty, large proportions also believe that Trump’s presidential campaign so far has been “mostly dishonest” (47-74%). By comparison, in every country surveyed, Joe Biden’s campaign is more likely to be seen as honest (26%-43%) than dishonest (7%-15%). However, far more people answered “don’t know” for the Democrat challenger than the Republican incumbent.

A large majorities in each of the surveyed countries – from a low of 61% in Italy to a high of 82% in Denmark – believe Donald Trump has been a “poor” or “terrible” for his country, while another 50-69% of Europeans consider Trump’s time in office has even had a negative impact on their own country and on the rest of the world. Substantial minorities even consider Trump to have had a negative impact on themselves personally (27-44%).

A bet on the Democrat?

While Trump basks in a negative view across Europe, one could think that Biden sounds is no doubt the better offer, but Europeans aren’t too sure about that.

Despite people across the six European markets surveyed (international relations, climate change, coronavirus, economics, terrorism and peace) tend to think that the Democratic challenger would do a better job than President Trump, only 29-49% think Biden will have a positive impact on their own country, while another 36-58% thinks he will have a positive impact on the world – although again large numbers of people say they “don’t know”. A minority of 7-18% expect Biden to have a negative impact. People across the seven countries who think the Democrat would make a “great” or “good” president still fairly low, at 17-23%. 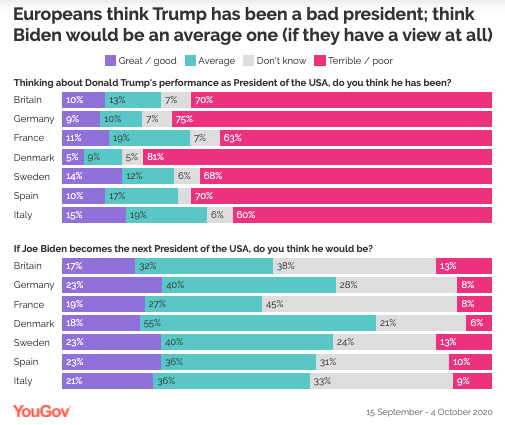