The insurance executive as anxious optimist

The insurance executive as anxious optimist

What’s on the mind of CEOs? PwC’s 21st Global CEO Survey reveals all.

Insurance continues to be one of the most disrupted sectors in the global economy and CEOs are more concerned about the pace of technological change than executives in any other industry, yet more than 90% of insurance CEOs are confident about their organization’s revenue prospects over the next three years. 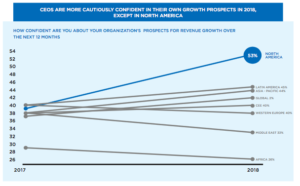 The 3 biggest concerns of insurance CEOs are over-regulation (95%), cyber security (93%) and speed of technological change (85%).

Earlier this year, 100 insurance CEOs participated in PwC’s 21st Global CEO Survey. The findings revealed that CEOs in the industry share a generally positive outlook, even as actual growth is failing to live up to expectations. Titled ‘The Next Big Leap,’ the report also explains how insurance firms can reinvigorate revenue growth while driving down costs.

Stephen O’Hearn, PwC’s Global Insurance Leader, says: “Among the many reasons for the high confidence of CEOs in the insurance industry is that the anticipated disruption from incoming competitors, like InsurTech and digital platform players, hasn’t materialized like the industry initially feared. Partnership, not rivalry, with new entrants is the order of the day.”

The grounds for optimism also include the increasing digitization of the global economy and resulting shift in consumer preferences which is opening up a range of new opportunities. For example, as more businesses move to digital channels, demand for cyber insurance is rising – 40 percent of CEOs from across all industries are now extremely concerned about cyber threats compared to just 24 percent in 2017.

Likewise, there are openings for insurers to become the ‘orchestrators’ of services such as mobility or Internet of Things-enabled smart homes.

A clear strategy to get up to speed

More insurance CEOs (85%) are concerned about the pace of technological change than leaders in almost any other industry.

Advances in technology are currently changing business and operating models in the sector, which is particularly challenging for an industry accustomed to gradual evolution rather than rapid transformation. 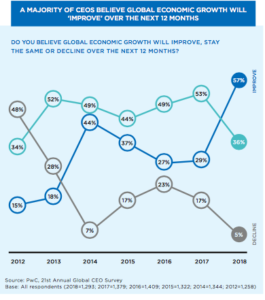 Half of CEOs within the insurance industry believe that global economic growth will improve over the next 12 months, an increase from only 19% in 2017.

Getting up to speed demands a clear strategy and roadmap for decommissioning legacy systems, accelerating automation, and laying the groundwork for the next wave of transformation.

Substantial opportunities lie on the horizon as a new generation of predictive analytics and AI transforms the ability of insurers to detect, anticipate, and avert risk.

Notable examples include RegTech, which can not only reduce costs in labor-intensive areas such as ‘know your customer’ requirements, but also aid risk management and improve the reliability of compliance mechanisms.

As Stephen O’Hearn says: “Regardless of the initiative, keeping pace demands a readiness to bring in- novation out of the fringes and into the mainstream of the organization. It also requires a willingness to experiment and even fail, albeit fail fast, and move on.”

There is another side of the coin when it comes to the aforementioned mix of optimism and opportunity.

66% of insurance CEOs still report increasing pressure on their organizations to deliver business results within shorter timeframes and more CEOs see changes in consumer behavior as a threat to growth (78%) than in almost any other sector.

So, while they may have overestimated the impact of outside threats and short-term disruption, insurers should not underestimate the need for longer-term transformational change into digitally-enabled, customer-focused organizations with flexible business and operating models.

According to the report, driving innovation requires a dialogue between human and technological resources to create a ‘bionic’ organization.This isn’t about one side dictating terms to the other, but humans communicating with AI and robotics to mutually improve outputs.

Key to this transformation will be the ability to attract digital talent, but at this point only 19% of insurance CEOs report that they are finding it easy to attract such workers.

As mentioned above, more than 80% are concerned about shortages of digital skills within their industry and the wider workforce. While this is a challenge for all business sectors–around three-quarters of participants across all industries in the PwC Global CEO Survey are concerned–insurance CEOs are the most worried. And it isn’t just digital skills that are in demand, but also the creativity and emotional intelligence needed to innovate and re-connect with customers. 86% of insurance CEOs believe they need to strengthen soft skills, as well as digital skills, within their organization.

As Stephen O’Hearn explains: “Successful insurers take both their technological capabilities and their readiness to innovate into the mainstream of their business. Rather than operating in isolation, humans and machines should actively collaborate. With these foundations in place, insurers can take the next big leap and become truly bionic organizations.”