Mixed views for the US and China dominance

Mixed views for the US and China dominance

Pew Research Center reveals how the world views the China-US balance of power.

More still name the U.S. as the foremost economic power than say the same of China, this according to a new Pew Research Center survey which was conducted among 38,426 people in 34 countries from May 13 to Oct. 2, 2019. 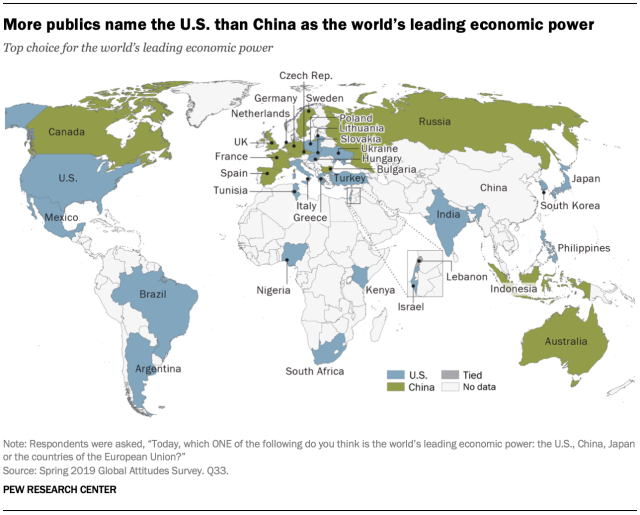 Across every country surveyed by Pew Research in Latin America and sub-Saharan Africa, as well as many in the Asia-Pacific, people name the U.S. as the top economy. In the U.S., by a 50%-32% margin, Americans name their own country as the leading economic power. According to the data, the people who named the U.S. as the world’s leading economy were also more likely to prefer strong economic ties with the U.S., and the opposite is true when it comes to China. The survey also showed that people generally see China’s growing economy as a good thing for their country, and believe China is having a predominantly positive influence on their country’s economic affairs,. When it came to alliances, many more name the U.S. as the top country their nation can rely on than China.

When it comes to which countries are most threatening, Pew Research states that both the U.S. and China emerge as top concerns across the publics surveyed – though largely in different regions. Latin American countries, as well as Middle East and North African countries surveyed, more name the U.S. as a top threat than say the same of China. The opposite is largely true in the Asia-Pacific countries, where many more name China as a top threat, including 40% of Australians, 50% of Japanese and 62% of Filipinos. Generally, countries with stronger human rights records and lower levels of corruption tend to be much less keen on China, as well as its neighbors, who also show a negative stance toward China’s growing military might. A median of 58% in the Pew Research survey across the 18 countries polled generally see downsides to a strengthening Chinese military.

Global views of China, however, are mixed. A median of 40% across 34 countries surveyed have a favorable view of China, while a median of 41% have an unfavorable view. When considering Chinese President Xi Jinping, views are, on balance, negative across the 34 countries surveyed, as a median of 45% say they lack confidence in him when it comes to world affairs, compared with a median of 29% who say they trust him to do the right thing. Still, positive opinions of Xi have increased in many countries over recent years. 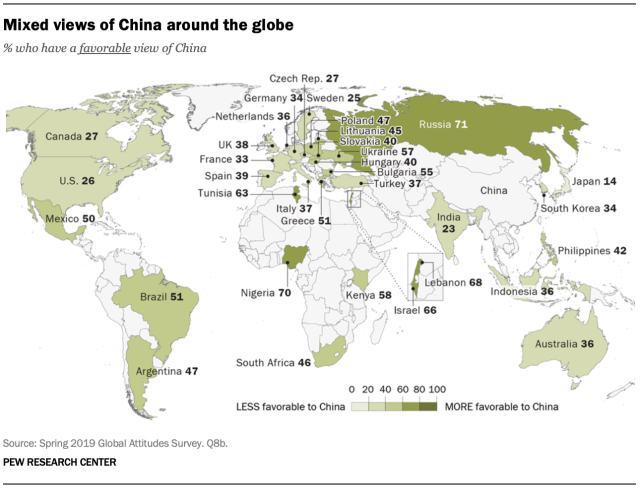 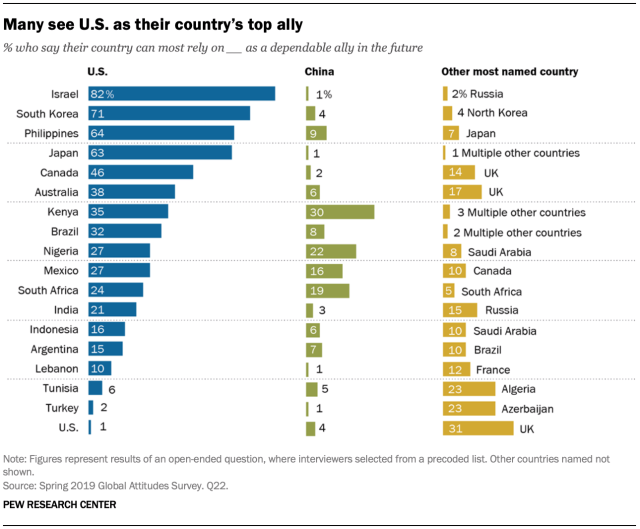