Talking about Usain Bolt is referring to one of the world´s greatest athletes, both in the field and in the bank account.

Like Michael Jordan, Roger Federer, Tiger Woods and Pelé, Bolt is part of the select group of sports greatest athletes, and like all of the above, they come and go with a price. 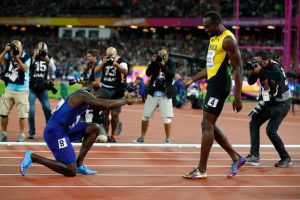 The great success Usain has enjoyed over the years has come hand-in-hand with a considerable amount of fortune.

At age 30, Bolt enjoys winnings of over 2 million dollars, but can earn up to 32.5 million every year by endorsements.

The deal alone with Puma –which started in 2002 and will continue to 2025– will have him earning more than 10 million dollars each year.

His other deals with brands such as Gatorade and Virgin Media have him in deals that gain him over 1.5 million dollars per contract.

We are definitely talking about one of the greats in sports and sports revenue, as he shows off some of the most lucrative contracts in sports.

It can be normal if you get dizzy reading all the specific details about Bolt´s earning, but there´s more.

Every time the Jamaica-born races in the Diamond League, a 10,000 dollar-earning is secured for Bolt while he can charge a fee of 400,000 dollars per meet.

When it comes to prize money, the Olympic legend is also an undisputed champions, as he can collect over 2 million in a years-time.

Videogames have also meant a significant cash amount for the recently retired athlete, as his name and figure was part of the Temple Run mobile game franchise which had over a billion downloads in 2016.

BOLT AND THE RICH GANG

Forbes´ list of the World´s Highest-Paid Athletes puts the Jamaican runner in position 23.

Bolt is one step above Real Madrid´s Gareth Bale and under Derrick Rose, Cleveland´s new purchase, becoming the only field & track sportsman on the list.

However, despite that there are other names who are getting paid more than Bolt, we are still looking at one of the kings of sports history when it comes to revenues and talent.