Effects of a possible Trump impeachment

Effects of a possible Trump impeachment

Would President Donald Trump’s impeachment really derail the US economy?

As the very real possibility that Donald Trump could face impeachment proceedings grows more likely, the US President himself has warned that the issue could wreck the country’s stock market and economy. 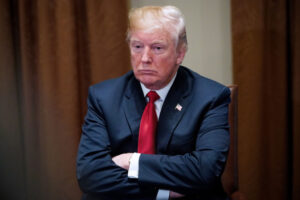 Speculation that Donald Trump may be impeached has been rekindled again and again.

“I tell you what, if I ever got impeached, I think the market would crash, I think everybody would be very poor,” Trump said in an interview that aired Aug. 23 on Fox & Friends. “I don’t know how you can impeach somebody who’s done a great job.”

Despite a generally well performing economy since he took office, Trump is under increasing political pressure after his former attorney Michael Cohen implicated him in a felony–a scheme to pay hush money to women claiming they had affairs with him. This is in addition to the ongoing investigations regarding Russian influence in the 2016 presidential race.

But should this be a genuine concern for US voters as the country approaches the November midterms, or is it merely more bluster from the most unconventional White House in modern times?

More the latter than the former

The current US economy, while it may not be the “greatest ever,” as the president claims, has indeed been performing well.

In the second quarter of 2018, the US economy grew at a pace of 4.1%, its best run in four years. Unemployment is lower than it has been for decades and corporate earnings are strong.

According to many analysts, a Trump impeachment trial could certainly rattle the stock market. “(It) clearly would present a risk to the market in the immediate aftermath of the midterms,” Jason Trennert, CEO of Strategas, told CNBC on the prospect of a Democratic surge in the upcoming elections–which would make a move towards impeachment very probable.

Yet Trennert views the doom-mongering by Trump as an exaggeration. “In the event of impeachment or resignation, there is no evidence to suggest that a President Pence would have a dramatically different approach to economic affairs,” he added.

Bloomberg columnist Conor Sen looks at it another way, arguing that, barring a Democratic majority post-midterms, the positive economic performance of the US under Trump could actually see him evade impeachment proceedings in the short term.

Writing for the financial news site, Sen argues: “Without a stock market crash, it’s unlikely he’ll ever be successfully impeached. Only after or in the middle of a crash would the political environment change enough to get Republicans to abandon him and impeach him.”