A lot to see in Lotto’s world

A lot to see in Lotto’s world

Italian painter Lorenzo Lotto was hugely popular in his day, but his work has been largely forgotten since.

In September 1503, in Treviso, a city in northern Italy, Bishop Bernardo de Rossi escaped assassination when a plot on his life was foiled.

His reforms, which shifted power back to the church and away from wealthy local families, had created a lot of enemies.

Triumphant, the bishop commissioned a portrait from a young painter, Lorenzo Lotto, who had recently arrived in the city.

Lotto’s portrait, finished in 1505, shows a defiant yet fearful man, his wide-eyed expression communicating both pride and vulnerability. It is literally warts and all—Lotto made no attempt to hide the blemishes on the bishop’s skin.

Other contemporary painters might have flattered their patron, but Lotto’s aim was to draw out the humanity in his subject. It is one of the highlights of “Lorenzo Lotto: Portraits”, an exhibition that has come to the National Gallery in London after a stint at the Prado in Madrid. Comprehensive and moving, it succeeds in making the case for Lotto as one of the best, if lesser known, Renaissance painters.

Ten years before he died in 1557, Lorenzo Lotto wrote that “art did not earn me what I spent.” He certainly put a lot of energy into it. It turns out Lotto was in fact a depressive. He became very disillusioned at times, but his work lives on and is even enjoying a revival.

Lotto was born around 1480 in Venice. As a young man, he showed he had a talent for painting. But the competition in a city which was home to burgeoning masters was stifling and he didn’t wait long before leaving. After he arrived in Treviso, he painted under de Rossi’s patronage for three years. He later moved on, via Recanati, Rome, and the Marches, to arrive in Bergamo, near Milan, in 1513, where he enjoyed his greatest success. Lotto had a sense of humor: his fresco at the Capella Suardi in Bergamo uses trompe d’oeil to make it look as though a cherub is peeing from a cupola onto the churchgoers.

Lotto’s portraits from this period show a similar subversive energy, which sets him apart from peers like Bellini and Titian. Like his contemporaries, many of Lotto’s paintings had a religious subject matter, but he also depicted figures from the flourishing middle class of merchants, medics, and clerics.

After failing to auction his work in Ancona, Lotto became a lay brother at the Holy Sanctuary of Loreto in 1552. He died there in 1557, having never married and leaving no children. Lotto’s late portraits, their muted browns and greys replacing his earlier luscious tones, reflect his own journey from the limelight into the dark corridors of his sanctuary.

This painting shows St Catherine entering her spiritual marriage with Jesus as he sits on his mother’s knee.

The symbolism is there—the child’s halo morphing into a portentous cruciform, the spiked wheel on which Catherine was tortured in the background. But Lotto’s skill at depicting people—their sumptuous clothes, their posture, their facial expressions (note the angel’s frown)—makes the painting feel fresh and relatable. It was made for Lotto’s landlord in Bergamo, a merchant called Niccolò Bonghi, in lieu of a year’s rent.

Lotto paints him into the scene, kneeling awkwardly behind the bed. The large beige rectangle in the background originally depicted a landscape, seen out of a window, but was allegedly cut out of the painting by a French soldier in 1527. 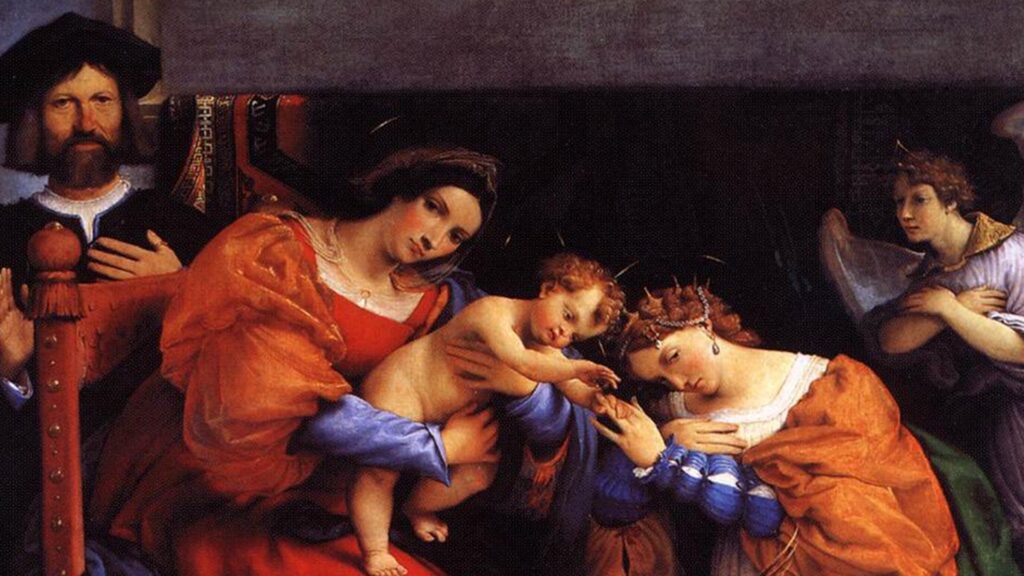 This double portrait of a married couple, whose identities are disputed, uses symbolism to emphasize their devotion to each other.

The man holds a piece of paper that reads homo nunquam (man never) and points towards a sleeping squirrel. The woman, whose face is strikingly pale, carries a lapdog, which represents loyalty. Mauro Lucco, an art historian, suggests that the painting was made after the wife’s death, citing the husband’s reddish features (had he been crying?) and the pallor and the position of his wife, who, unusually for Renaissance portraits, appears above her husband.

The husband, Lucco believes, is making the point that he would never act like the squirrel, because squirrels are known for sleeping through storms, and he is ready to face up to his difficulties.

Other art historians have suggested that the squirrel represents lust and the man is making a statement of marital fidelity. Whatever its meaning, this is a painting that shows how accomplished Lotto was at depicting emotion. The couple’s bodies, clad in dark clothing, seem to commingle in the painting’s shadowy center, their hands reaching for one another. 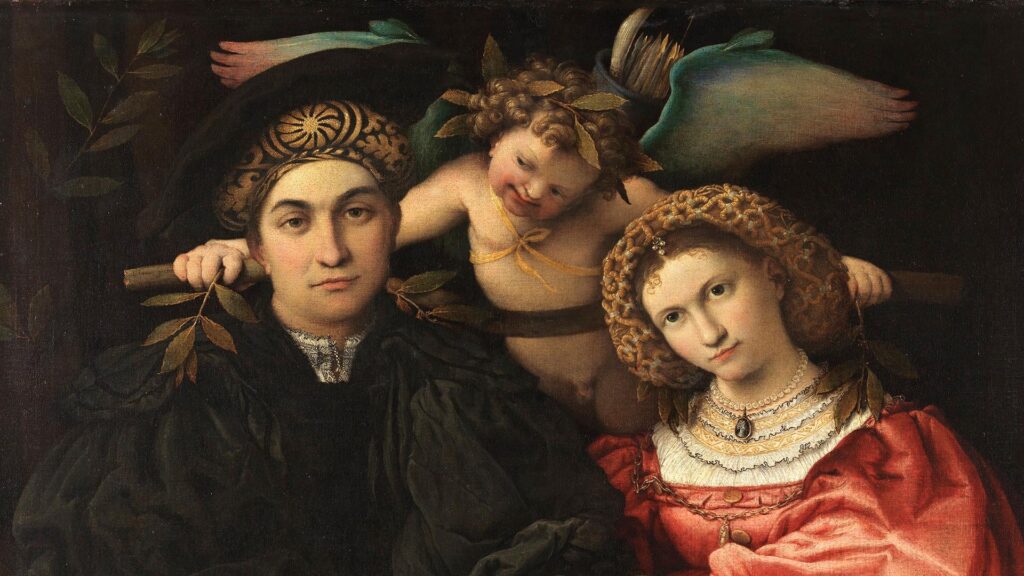 During his time in Bergamo, Lotto enjoyed such success that he was considered the city’s most notable painter.

He returned to Venice in 1525 at the peak of his powers and received many commissions, including one from Andrea Odoni, a wealthy merchant and collector of classical art. The resulting portrait is one of the most dynamic of the entire Renaissance period. Giorgio Vasari, a chronicler of the Renaissance, exclaimed “che è molto bello!” (It’s very beautiful!) on seeing it.

Limbless classical sculptures, collected by Odoni, frolic around the frame, while a cupid pees into the bowl in which Venus bathes her feet. Odoni himself is bold, gestural, arresting. The play of light and shadow is striking, as is the accuracy with which his brow and lips are depicted. At his best, Lotto painted with a joyous energy.

This portrait, made as Lotto entered his final decade, feels more intense than earlier works.

Brother Gregorio was a friar of the Hieronymite order, a group of poor hermits devoted to St Jerome. Lotto revels in the browns of the clothing, the dark ochre in the skin tones, and the depth of the overcast sky as a friar clenches his fist in front of his heart in a gesture of internal pain. His posture mimics that of Jerome in other paintings (for example, El Greco’s “St Jerome in Penitence”, c.1595).

Once again, we see Lotto pay close attention to his sitter’s emotions. Perhaps more than any of his works, the troubled features of Brother Gregorio’s face echo the observation by Bernard Berenson, the art critic who “rediscovered” Lotto at the turn of the 20th century, that Lotto’s portraits “have the interest of personal confessions. Never before or since has anyone brought out on the face more of the inner life.” 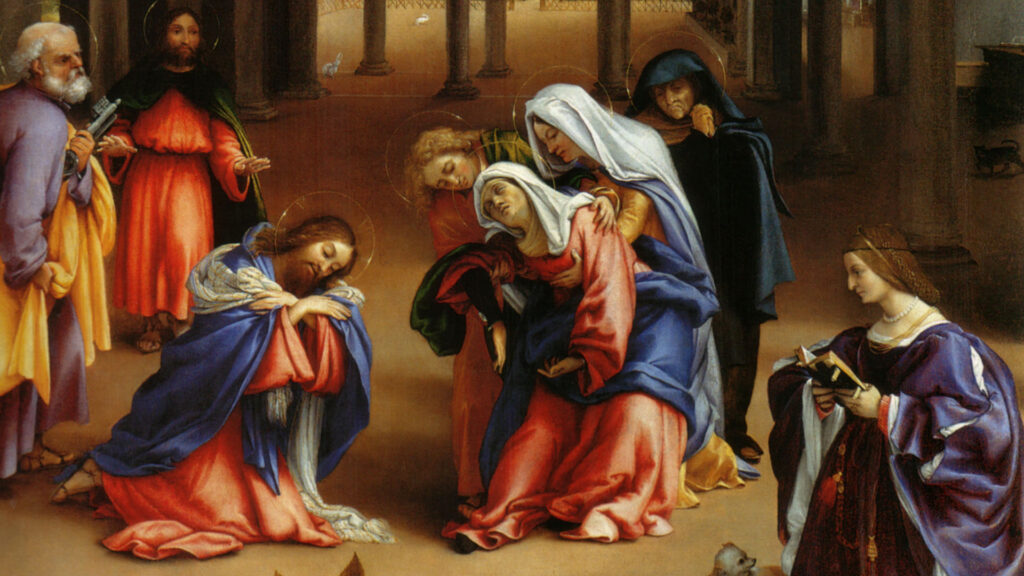