Pew Research studied the general US sentiment on the country as global leader of space.

There was once a time when dominance on Earth was disputed up in space.

Shooting the first man out of orbit had means of evolution and fed the country of incredible technologies that give military and strategic advances among geopolitical rivalries.

As this industry has evolved notoriously, in the midst of the National Aeronautics and Space Administration (NASA), Pew Research Center turned to investigate the general US sentiment on the country as the global leader of space.

According to the data, roughly seven-in-ten Americans (72%) say it is essential for the U.S. to continue to be a world leader in space exploration, and eight-in-ten (80%) say the space station has been a good investment for the country, despite continuous growth of private sectors like SpaceX and Virgin Galactic.

65% of Americans believe NASA should still play a vital role in the exploration of space, while a third (33%) say private companies will ensure enough progress in this area even without NASA’s involvement in the near future.

Support from all demographics

Space exploration is interesting to everybody, no matter age, gender, educational or political groups.

Each generational group, for example, according to Pew Research Center data, expresses nearly equal levels of strong support for continued U.S. space leadership – from Baby Boomer and older generations (71%) who lived through the “Right Stuff” era that pioneered space exploration to Millennials (70%) who grew up during the space shuttle program. 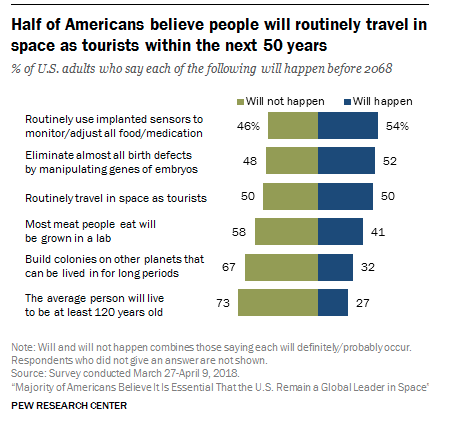 What people expect from astronauts?

As Pew Research Center asked about the importance of NASA missions, respondents of the essay said that monitoring key parts of Earth´s climate system could be the most important task.

Monitoring asteroids that could hit Earth, conducting studies on the knowledge of space, and developing technologies for general uses were ranked as the top labors. Sending astronauts to the moon was the least important mission.

Even so after the “golden years” of space travel has come and gone, it is still present and very much innovating itself, so much that the Trump administration has even been exploring the possibility of turning the space station into a commercially run venture after 2024.

Leaders of the final frontier

Today, in a world that finds itself in a much different world from the ones when Apollo astronauts first set foot on the moon, the US and Russia share the dominance of space with China, Japan and India, who have emerged as important players in space exploration, while private sectors increase their abilities and involvement in deep space travel.

So, can you hear me, Major Tom? People still believe in the stars.