A recent YouGov Poll asked whether Americans considered themselves to be rich or poor.

How much would you have to earn in the US before someone considered you rich? According to a recent YouGov poll, that depends heavily on who you ask.

The research survey, which was carried out in September 2018, found that 76% of respondents think an annual income of $10,000 constitutes being poor, but the label gets shaken off once yearly earnings hit $30,000 with half of the population saying someone in this income category is neither rich nor poor.

Half of the surveyed population (50%) believes someone on $30,000 a year is “neither rich nor poor”, while one in three (32%) still consider them poor, however, and only 6% think that they are rich.

At $100,000 opinion has tipped much more strongly towards “rich” at 56%, with only one in three (34%) believing someone with an income this high to be “neither rich nor poor”.

The YouGov Poll also asked whether Americans considered themselves to be rich or poor.

Overall, the majority (64%) think they are neither. One in four Americans (25%) believe themselves to be poor, whilst just 5% think themselves rich. (A final 6% don’t know).

Click here to read on how the world wealth is being distributed. 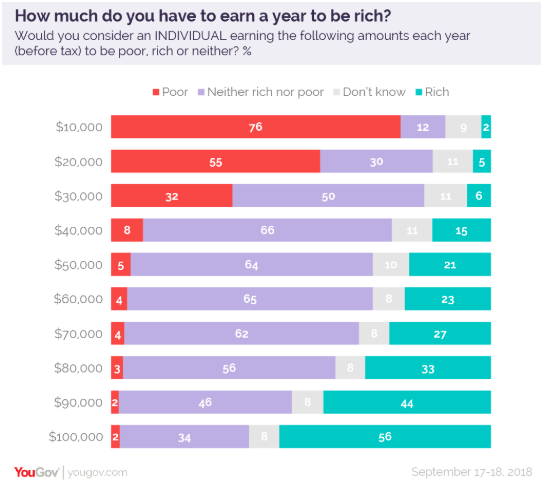