Led Zeppelin is the most popular band in the world.

“There was just wall-to-wall amplifiers, and a space for the door—and that was it,” recalled John Paul Jones, Led Zeppelin’s bass guitarist, many decades later.

“The whole room just exploded.” No tape has survived of that first rehearsal on August 12, 1968, which brought together a quartet who would sell more albums over the next 50 years than any other rock band apart from The Beatles.

But listening to live bootlegs of “Train Kept A-Rollin’”, the blues tune that they practiced that day, it is easy to understand how that first jam laid the ground-work for heavy metal.

The band’s name was pinched from Keith Moon, drummer for The Who, who had suggested in 1966 that a potential group involving him and Page, without a singer of the requisite quality, would go down like a lead balloon. Page noted down the words “Led Zeppelin” and thought it would be a perfect for a new band that combined shades of both light and heavy music.

Though the phrase “head-banging” was reportedly coined to describe their concerts, it was far from the only style of music that the group produced. Equally as beloved were Page’s tinkling acoustic guitar and Jones’s keyboards and woodwind, which combined to produce the iconic opening of the Zeppelin classic, “Stairway to Heaven.” 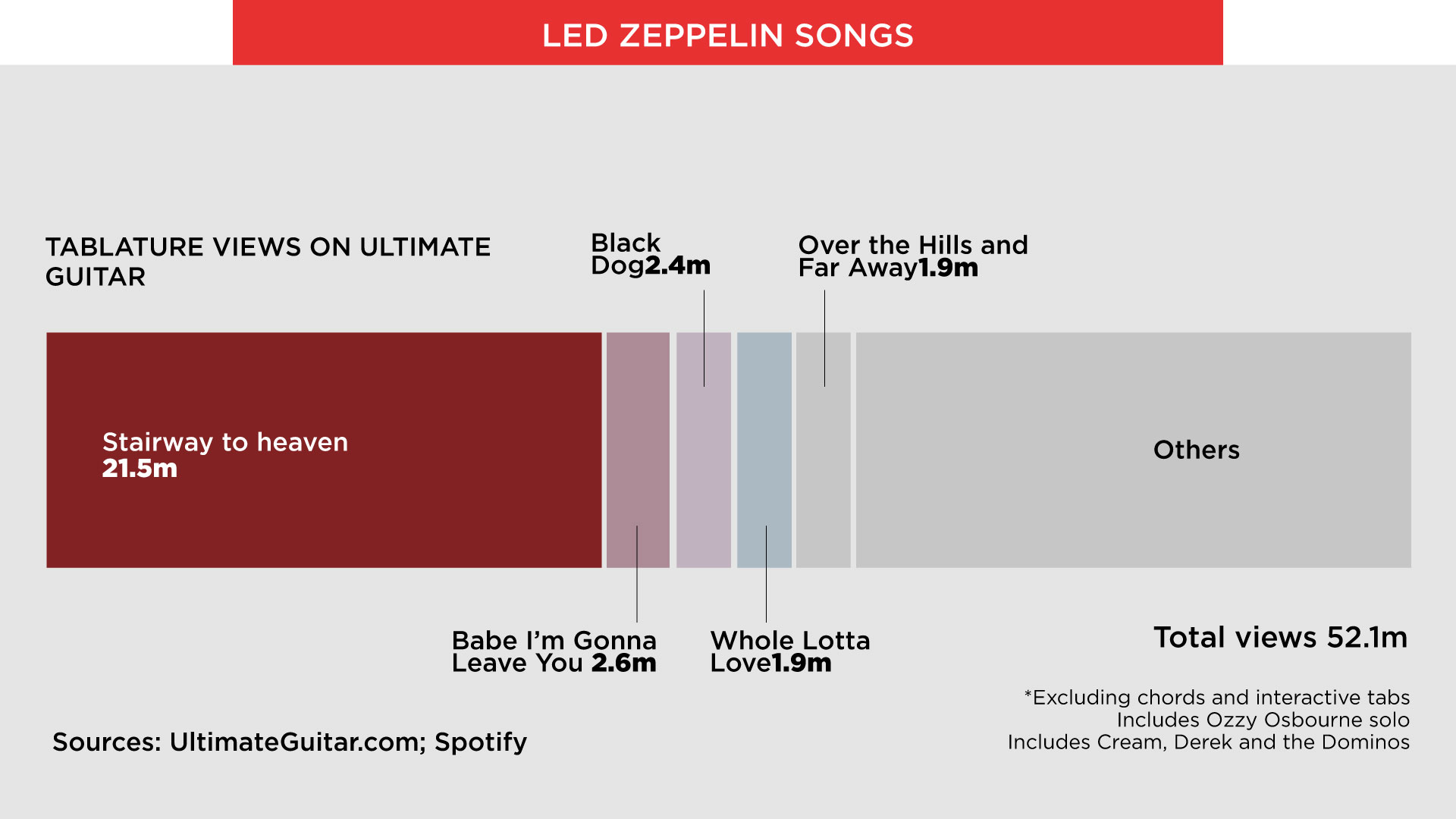 The song’s gradual crescendo, from gentle acoustic finger- picking to hard rock, would become a staple of their compositions.

The first of its kind was “Babe, I’m Gonna Leave You,” the second track on their debut album—which, much like “Stairway to Heaven”, attracted claims of plagiarism.

The band later acknowledged that “Babe, I’m Gonna Leave You” was in fact written by a folk singer called Anne Bredon rather than it having endured generations as a traditional, and they agreed to pay her royalties for it. But they denied that they had copied the arpeggios in “Stairway to Heaven” from “Taurus,” a similar-sounding song by Spirit, who once supported them on tour.

A lengthy legal battle ensued; the band won in the first instance, but an appeal is still being fought in US courts. The band has also settled with Willie Dixon, a Chicago blues musician, after he alleged copyright infringements on the album “Led Zeppelin II.”

But if the group’s debts to folk and blues music meant that they often borrowed from others, Led Zeppelin were hardly unoriginal.

Page, in particular, reinvented what the guitar was capable of. He experimented with strange tunings and odd techniques, including the Eastern-inspired rising chords of “Kashmir,” the screeching violin bow on “Dazed and Confused,” and the reverse echo on “Whole Lotta Love.” He also popularized the use of the double-necked guitar—which aside from allowing him to switch easily between rhythm and lead parts, also crafted his image as the original guitar hero.

The band’s image, epitomized by Plant’s open-shirted swaggering, certainly contributed to their appeal.

They quickly took to touring on a private jet, the “Starship,” and trashing hotel rooms. Drummer John Bonham, the most rebellious of the four members, used to drive his motorcycle through hotel lobbies. But that same sex, drugs and rock ’n’ roll lifestyle also heralded the band’s demise in 1980, when Bonham choked to death on his own vomit after consuming roughly 40 shots of vodka.

The music left behind was immortal. 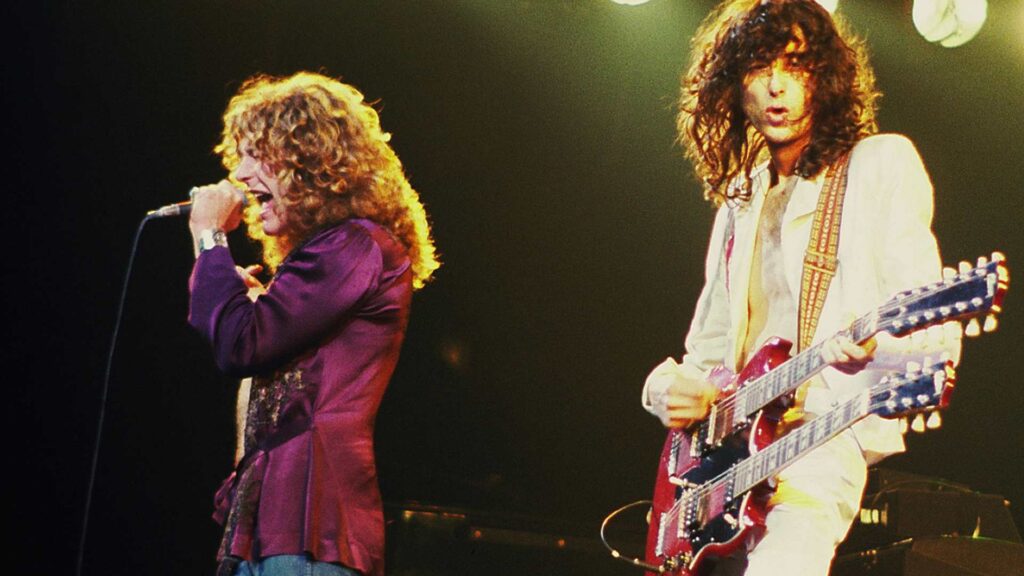 Jimmy Page popularized the use of the double-necked guitar— which aside from allowing him to switch easily between rhythm and lead parts, also crafted his image as the original guitar hero.

Half a century on, that eagerness by novice musicians to nail the opening notes of “Stairway to Heaven” or the drum intro to “Good Times Bad Times” remains the band’s greatest legacy.

Each of the quartet is widely acknowledged as a pioneer in his eld. Rolling Stone, which savaged Led Zeppelin’s early albums, has ranked Bonham as the greatest drummer of all time, Page as third among guitarists, bass player John Paul Jones sixth among bassists, and vocalist Robert Plant fifteenth among singers.

The heavy-metal giants of the 1980s grew up worshipping them. Kirk Hammett, Metallica’s lead guitarist, once described the band as the soundtrack to his youth: “They were pretty much the first band I actually sat down with a guitar and tried to learn the guitar solos and the songs,” he once said.

Half a century on, that eagerness by novice musicians to nail the opening notes of “Stairway to Heaven” or the drum intro to “Good Times Bad Times” remains the band’s greatest legacy.

The rawness of their recordings means that they are not as suited to radio airplay as the beautiful melodies and harmonies of Queen, or the upbeat power chords of AC/DC. But among rock bands of the era, only The Beatles have had their songs searched for more frequently on UltimateGuitar.com, the most popular website for guitar tablature (which shows a wannabe soloist which frets to use, rather than the crotchets and quavers of standard notation.)

Some 22 million of Led Zeppelin’s page views have been for “Stairway to Heaven,” a riff so hackneyed that it was famously banned in a guitar shop in the 1992 comedy lm “Wayne’s World.”

But even if you eliminated each band’s most popular tab from the sample, Led Zeppelin would still be a comfortable second on the chart.

Fifty years on, the band continues to inspire a whole lotta love.