Love in the digital age

Love in the digital age

From how couples meet to how they spend, people are experiencing shifting trends regarding love.

From dating to spending, Millennials and GenZs have presented new habits and ways towards living and expressing love.

When it comes to meeting ones soulmate, the intermediation of friends had been the best source of connections to others since the end of World War II, but it has been in decline for the most of the late 20th century, as online apps like Facebook, best for engaging on old acquaintances, and eHarmony, for compatible matches, strongly peak among younger generations, an increasingly large number of heterosexual and homosexual daters is opting to meet their partner online, according to surveys carried out and analyzed by Stanford University and reports from Pink News.

For heterosexuals, meeting though friends was the most important rom the end of World War II until 2013, when online hookups began surpassing as the main way to find a partner. For same-sex couples, a study called “disintermediating your friends,” carried out by Michael Rosenfeld and Sonia Hausen of Stanford University, and Reuben J. Thomas of the University of New Mexico, revealed that 65 % of same-sex couples that got together in 2017 met online. Researchers also found that the next most common way for same-sex couples to get together in the US, after meeting online, was in a bar or restaurant. The least common way was through church.

Now, before we start judging methods and criticize its questionable image, online dating isn’t all about casual sex and promiscuity according to a recent YouGov poll, which revealed that the most cited reason to use a dating app/website among Americans is finding an exclusive romantic partner. In fact every second respondent is looking for something serious online, while only 23% are chasing after more casual acquaintances.

However, as online hookups have peaked across generations, so have love scams, and it can cost quite a buck.

A  U.S. Federal Trade Commission (FTC) report found that the number of romance related scams have been on alarming rates over the past five years, with losses exceeding $230 million dollars annually, more so when age is not necessarily an impediment for this practice, as both younger generations and elders are a great target for these scams. 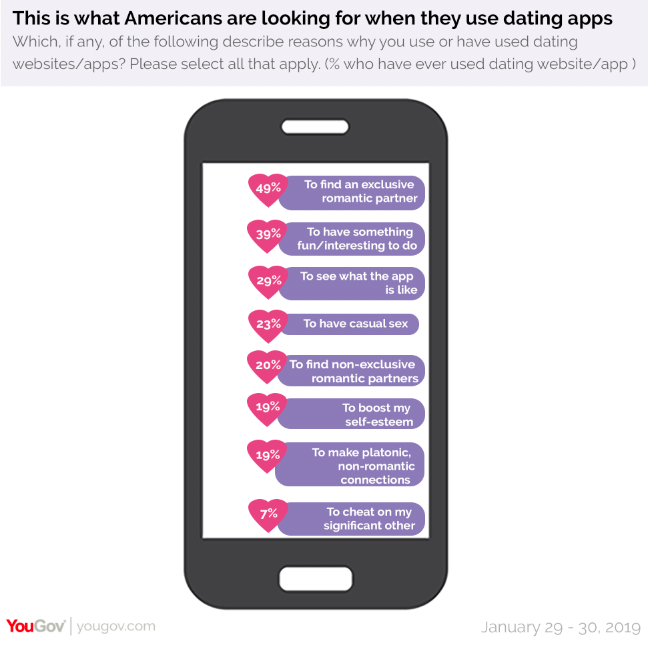 The National Retail Federation (NRF) has forecast that Americans will fork over a total of $27.4 billion on cards, flowers, chocolates and candlelight dinners. That’s a record level of spending and represents a steep percent increase on 2018’s planned spending figure of $20.7 billion.

The unusually large increase in average spending appears to be due to strong consumer finances and a continued trend of consumers buying more gifts, cards, candy and flowers for friends, family, co-workers and pets. The increase in total spending comes as the number of people celebrating Valentine’s Day returned to 55 percent, about average for the past decade, after a dip to 51 percent last year, NRF reports.