Sleep No More: a grasping experience

Sleep No More: a grasping experience

Sleep No More is the New York City production that you can’t miss out on.

Looking for a new theatrical experience? Sleep No More in New York City could be your next destination. 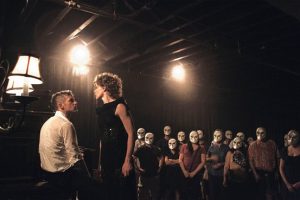 ‘Sleep No More’ at the McKittrick Hotel .

First exposed on March 2011, the site-specific production also is inspired on various of Alfred Hitchcock’s work.

The play allows the audience to move through the settings and interact with the props, which defines it as an immersive play.

Although it is not explained as a horror play, organizers do warn visitors may face “intense psychological situations”.

The three-hour evening keeps the audience on the edge of their seat while watching the grasping turn-of-events that develop in front of them with a rotating cast of roughly 25 actors.

Sleep No More: Word is out

These are some of the statements the media has written after visiting “Sleep No More”:

The play is at The McKittrick Hotel, which was intended to be New York City’s finest and most decadent luxury hotel of its time.