Teachings of the Dragon

Teachings of the Dragon

Bruce Lee brought together ancient ideas with his own of physical and psychological discipline.

A fighter. A thinker. Bruce Lee’s life, philosophy and legacy remain intact more than 40 years after his death. 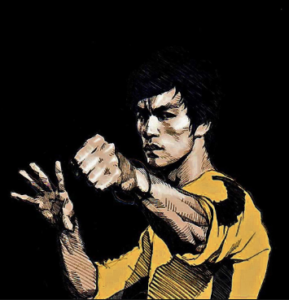 “There is a difference: a) the world b) our reaction to it.”

He believed kung-fu and philosophy were inextricably entwined, each a vehicle for the other, just as he saw philosophy as inseparable from everyday life.

He took this to all stages of his life, becoming one of the least appreciated philosophers of the twentieth century, and a vital force in introducing Eastern traditions to Western audiences.

Aside from his legendary legacy in martial arts and film, Bruce Lee brought together ancient ideas with his own singular idea of physical and psychological discipline.

From Brainpickings, with special permission from the Bruce Lee estate, here is an exclusive look at several pages from his 1968 pocketbook or plain 3×5″ lined yellow notecard, which he signed, almost like a will or perhaps a contract with himself.

Recognizing that the power of will is the supreme court over all other departments of my mind, I will exercise it daily, when I need the urge to action for any purpose; and I will form HABIT designed to bring the power of my will into action at least once daily.

Realizing that my emotions are both POSITIVE and negative I will form daily HABITS which will encourage the development of the POSITIVE EMOTIONS, and aid me in converting the negative emotions into some form of useful action.

Recognizing that both my positive & negative emotions may be dangerous if they are not controlled and guided to desirable ends, I will submit all my desires, aims and purposes to my faculties of reason, and I will be guided by it in giving expression to these.

Recognizing the need for sound PLANS and IDEAS for the attainment of my desires, I will develop my imagination by calling upon it daily for help in the formation of my plans.

Recognizing the value of an alert memory, I will encourage mine to become alert by taking care to impress it clearly with all thoughts I wish to recall, and by associating those thoughts with related subjects which I may call to mind frequently.

Recognizing the influence of my subconscious mind over my power of will, I shall take care to submit to it a clear and definite picture of my CLEAR PURPOSE in life and all minor purposes leading to my major purpose, and I shall keep this picture CONSTANTLY BEFORE my subconscious mind by REPEATING IT DAILY.

Recognizing that my emotions often err in their over-enthusiasm, and my faculty of reason often is without the warmth of feeling that is necessary to enable me to combine justice with mercy in my judgments, I will encourage my conscience to guide me as to what is right & what is wrong, but I will never set aside the verdicts it renders, no matter what may be the cost of carrying them out.