Fascinated by psychology and haunted by mental collapse.

At the start of the 20th century, Sigmund Freud observed the psychological phenomenon of “repetition compulsion,” the pathological desire to repeat a pattern of behavior over and over again. He no doubt would have diagnosed the painter Edvard Munch with such an affliction. Munch returned obsessively to certain visual motifs: uncanny sunsets, zombie-like faces, threateningly sexualized female bodies. 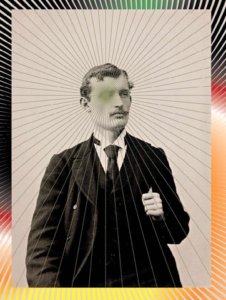 And if he had, Freud might well have looked to Munch’s biography for the roots of his mental anguish.

There is much to unpick. His mother died from tuberculosis in 1868 when he was five years old. Nine years later, his sister died of the same disease. At a time of rapid industrialization and grinding urban poverty, tuberculosis was tragically common. Munch had to watch as his father, a doctor, desperately tried to save the lives of consumptive patients, o en resorting to prayer when all else had failed.

This, and the Lutheran strictures of Munch’s adolescence in conservative Kristiana (now Oslo), did li le to encourage the healthy processing of Munch’s trauma. By the time he reached adulthood he longed to escape, and managed to do so by falling in with a bohemian set of radical artists and writers, including Henrik Ibsen and August Strindberg. Munch soon developed a visual style that cast aside the Scandinavian traditions of formal portraiture and stately landscapes, resulting in vivid and unnerving prints.

“Nature is not only all that is visible to the eye… it also includes the inner pictures of the soul.”- Edvard Munch

Printmaking is by its very nature a process of repetition. There is also something almost violent about its technical vocabulary of acid bites, dry point scratches, and woodcut gouges. Possibly this appealed to Munch, as he printed, scraped, clawed, and re-printed his work, the resulting image darkening with each new impression. The process enabled him to express his innermost thoughts. Many Symbolist artists of the fin-de-siècle period were interested in depicting emotion, but few did so as compellingly and knowingly as Munch, who was both fascinated by the new science of psychology and haunted by the specter of mental collapse. 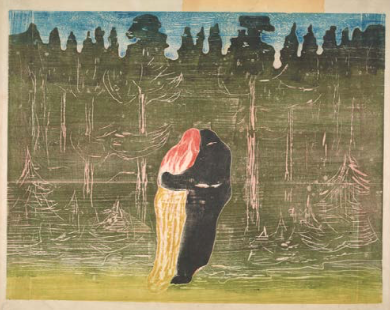 “Towards the forest II” (1897/1915) In 1908, Munch, suffering from acute anxiety and alcoholism, was admitted to a psychiatric clinic in Copenhagen. On his return to Norway a few months later, his artistic priorities shifted, and he became interested in depicting the natural landscape. By 1916, he had bought an estate in rural Norway, where he would live until his death in 1944. In the three “Towards the Forest” prints, the culmination of his technical skill as a print- maker appears to coincide with a measure of personal peace. The compositions show an embracing couple, stepping away from the viewer into unmistakably Scandinavian woodland. The scene is quietly harmonious. Munch’s reworking of the wood over the course of three impressions is increasingly less aggressive and more subdued. 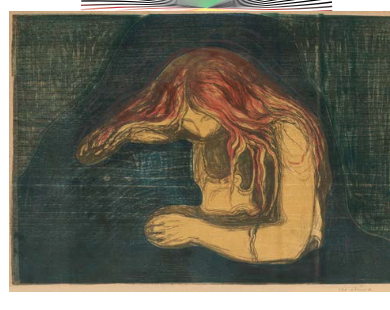 “Vampire II” (1896) This print is similarly equivocal, but with significantly heightened stakes. One of twelve versions of an image which Munch obsessively copied and reworked, he claimed it depicts “just a woman kissing a man on the neck.” Munch’s friend, Stanisław Przybyszewski, a novelist, dramatist, and Satanist, immediately identified the image as that of a “man who has become submissive, and on his neck a biting vampire’s face.” Like an ambiguous optical illusion, the image flickers between intimacy and violence. The strands of hair suggest mutually entangled warmth, and then trickling rivulets of blood.

“The scream” (1895)
The original “Scream” painting, which first appeared in 1893, continues to hang in the National Museum in Oslo. This alternative version, a lithographic print from 1895, sees the tumultuous, blood-red clouds of the original transposed into barometric lines of black and white. What this version loses in colorful intensity, it gains in the stark effect of panic. In black and white, the figure almost merges with the background, hinting at a terrifying loss of selfhood.