Two books that changed the life of Sergey Brin

Two books that changed the life of Sergey Brin

A good book inspires, and sometimes, it can even change your life. 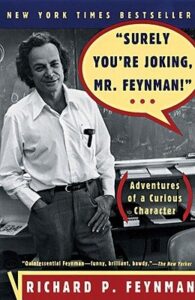 “Surely You’re Joking, Mr. Feynman!” was released in 1985, it covers a variety of instances in Feynman’s life.

This is exactly what happened to Sergey Brin, co-founder of Google, with two books that steered the direction of his professional career.

Brin started his career as an entrepreneur from a garage long before building one of the largest technology companies in the world with Larry Page in 1996.

In an interview with American Academy of Achievment, Brin explained how books helped him combine technology and creativity to the point of turning his life around.

Brin says that this book impelled him to devote himself to technology. As an entrepreneur reading the book, he understood that anyone who has an idea could be motivated through readings to turn those plans into reality.

What’s the book about?

The book tells the life of the winner of the Nobel Prize in Physics in 1965, Richard Feynman. It is a collection of adventures and experiments that he narrated to his friend and companion Ralph Leighton, which were later compiled by Edward Hutchins from recorded conversations.

Some of Google’s services, mainly Google Earth, have some resemblance to software that appears only in science fiction books, which is why we understand that this is one of Brin’s favorites and on in which he has found inspiration.

What’s the book about?

It’s a science fiction novel full of recognizable elements for readers who are experts in mathematical and scientific concepts, referring to new technologies and a cyberspace called in the book as “Metaverse”.

The fact that an entrepreneur, now a billionaire, refers to these two books as readings that defined his life and career, really gives us a perspective on what books can teach us, wether it be an interesting fact or the inspiration to find a specific path that determines our goals.

Read here on the top books of 2017 according to Bill Gates.