Tea has been an important of the daily life of generations of drinkers in love with its variety of aromas and flavors.

In the United Kingdom, tea is drunk at all hours of the day. 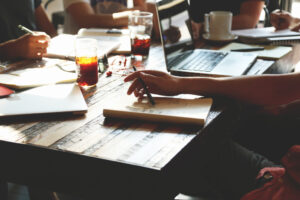 You can travel to China, Africa, or India with a single cup of tea. (Image: Startup Stock Photos)

With breakfast, mid-morning, in the afternoon, and tea among all the other teas. It can be taken with all kinds of cookies, cakes and desserts, or if you prefer, alone.

For many, the act of boiling water, waiting for the infusion, and adding milk and sugar (if you prefer) can be hypnotic, relaxing and deeply traditional.

Although its consumption dates back to China in 250 BC, innumerable accounts refer to the fact that the habit of taking tea in Europe began in the eighteenth century when a member of the British aristocracy began to take a light snack between the two main meals, breakfast and dinner. Little by little, this custom, which took place around ve in the afternoon, became a social event and evolved to include sweet and savory snacks typical of the country.

Enjoying a cup of tea means being part of a millenary tradition that goes far beyond the simple pleasure of drinking. In sixteenth-century Japan, for example, the tea houses had such tiny doors that it forced visitors to crawl in on their hands and warriors to leave their swords outside.

This way, a humble attitude was guaranteed by both parties and also the promise of a civilized meeting, free of violent intentions.

Currently, the habit of tea drinking has many variations and lacks the formal protocols of the past. Europeans drink it during their work breaks; Asians do so before lunch. One of the most popular styles of Chinese food is the famous Dim Sum, originally from the Cantonese region, which is usually accompanied by a cup of tea.

Dim Sum is not just about food. It’s a time for friends or family to gather for tea and conversation, sometimes for hours at a time. Tea is the key to enjoying Dim Sum because it allows mo- re time for conversation and therefore a longer and healthier digestive process.

The Cantonese people even call it ‘yum cha,’ which basically means drinking tea.

Many social customs have evolved around this tradition. However, to do it the right way, certain steps must be followed that are still practiced in many traditional Dum Sum restaurants.

For example, in Chinese folk tradition it is customary to serve tea to the rest of the diners before filling your own cup, while according to Cantonese custom, the table should be tapped with the index finger as a way of thanking the person who served the tea. The gesture equates to an act of reverence.

Normally, Dim Sum is accompanied by a very popular type of tea that aids digestion, called bolay tea, which is fermented. Other types of tea that are usually associated with Dim Sum include black, jasmine, chrysanthemum, oolong, and the famous Chinese green tea.

According to the Chinese, the reason for combining this particular dish with tea is a belief in the astringent power of the beverage to clean the tastebuds before eating, leaving them ready to appreciate the full magnitude of the flavor of Dim Sum.