Ancho Reyes is the first and only liquor made out of chile ancho pepper.

The first step of making a liquor with chile, one of the most distinctive raw materials in Mexico, takes place in the fertile soil of San Martín Texmelucan, Puebla.

Upon learning about the ancient traditions of food and beverage mixing that were practiced in the state of Puebla, especially by the Reyes family, a group of investors, encouraged to rescue the sensory heritage of Mexico through taste, invested to create this rare and unique product.

After years of forming alliances, investors worked with the family of farmer Saúl Calixto and others more dedicated to the land to start the cultivation of raw materials and begin the process of Ancho Reyes, a drink that shows that, in the end, every detail matters.

The process of Ancho Reyes begins by planting a broad harvest of chiles that are watched and attended full time by the owners of the field; after a careful process and seeing the chiles dry up, the best quality is selected and cataloged between chile poblano and chile ancho pepper, then, they are put in sacks and transported to the factory where they are cut by hand and placed in the last selection of the input.

Arriving at the factory, that is just a couple of hours from the farmland, just aside from the city´s downtown, the chilies are scissor-sliced and passed on to production tanks where they are macerated in a distilled cane for half a year. There, liquids and solids are separated in jars and then released, later, they are mixed according to their category to achieve an exact fusion of the ingredients.

The result of this goes on to the last phase, that of bottling the drink, which is the final presentation of a bottle that looks like a medicine bottle of the early 1900´s, however, what is inside is a sacred and carefully watched beverage that unites many of the traditional elements of Mexican cuisine. 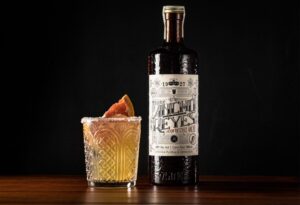 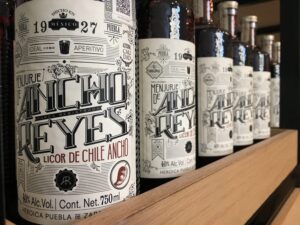 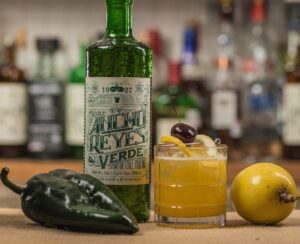 Ancho Reyes in an effort of many families that work to rescue the tradition and flavor of one of the flagship crops of Mexico, the chile, as they recall the passionate speeches and unique menjunjes that make the state of Puebla into one of Mexico´s most valued cuisines.

For Ancho Reyes to come alive, natural elements such as the sun and the soil enter the process, they work with the hands of families from Puebla, who have been engaged for generations in the cultivation and care of the land, and this creates a mystic drink that carries its own attitude like the one mezcal and tequila have carried on so well across the world for years.

That is perhaps what makes this chili liquor so special: the fact that everything comes together to create an exciting beverage that serves as an honorable excuse to bring family and friends together.

Ancho Reyes still seeks to establish a loyal consumer base and bring the flavors of Mexico and Puebla to more and more corners of the United States, Canada, and across seas to India, South Africa, Turkey and Japan, however, for now, the product is setting trends and gaining recognition among design concepts, flavor and innovation.