News fatigue for all

News fatigue for all

Studies show US citizens feel saturated with the amount of information they receive.

In a time where news is abundant and immediate, we can become overwhelmed and saturated with the amount of information we receive.

According to a  Pew Research Center report, almost seven-in-ten people (68%) inside the US feel worn out by how much news they receive, while only 3 in 10 say they like how much information they get.

Key findings in the report state that 17% of Americans say national news organizations are doing very well at keeping the public informed of the most important national stories of the day, while 24% say they do not too or not at all well; the largest portion, 58%, say the news media do fairly well. 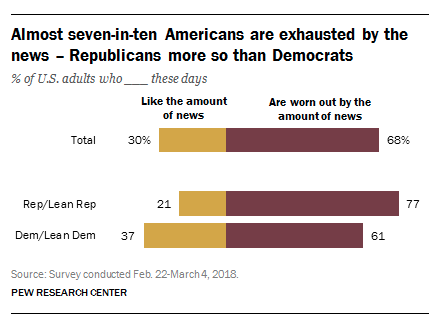 White Americans are feeling more exhausted towards news than other demographics.

Pew Research Center also reports nearly three-quarters (73%) of white Americans express fatigue with the amount of news, much higher than among both Hispanic (55%) and black Americans (55%).

As for women, they are also feeling overwhelmed, and somewhat similar than men (71% vs. 64%, respectively).

Within senior adults, those ages 65 and older are slightly less likely than those who are younger to express a sense of exhaustion towards the saturation of news.