Invasion of the sitting disease

Invasion of the sitting disease

Our technology-attached lives has us sitting down for long periods of time, risking our health.

Have you ever stopped and thought about how many hours you spend sitting down each day?

Our modern, technology-attached lives, both at work and at home, has us sitting down for long periods of time, while physical inactivity takes its toll on our system, deteriorating posture, metabolism, the body´s ability to burn extra calories and to better the blood flow, bringing life to a medical term which has come to be commonly known as the sitting disease. 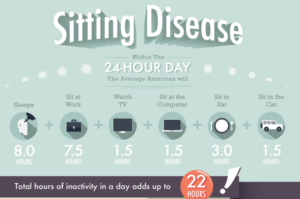 Putting this disorder in perspective, the sitting disease is visible in almost anybody, as Marc Hamilton, professor at the University of Houston, proved thru his own research that adults spend more than nine hours a day being sedentary, all the while our body is built to move all day. For Hamilton, an important reality of the sitting disease is stating that 30 minutes of exercise per day cannot save you from the stationary positions you have the other 23-and-a-half hours during the day.

You may think sedentary activities are not part of your day, however, sleeping, sitting at work, gaming, lounge while reading a book, watching tv, sitting by a computer, sitting down to eat and waiting in the car through traffic are all part of taking on a sedentary lifestyle that can really take a toll on the health and well-being of our body, generating a series of problemas such as an increase of cardiovascular decay, muscular disorders, colon cancer, chronic back pain and headaches as well as obesity and diabetes as we do not move enough to contrast the static activities we destine the majority of our time to.

The rise of the sedentary lifestyle -which means sitting for more than two ours at a time- has caused a significant impact and generated an important amount of awareness of how our lives have stopped being involved in more active actions and turned to commodity and idleness as a synonym of a happy, easy, non-stress life.

For Dr. Alice Chen, Physiatrist at the Hospital for Special Surgery in New York, our way of life was far more active in the past years, as going to the market became a must-do activity if you wanted a complete meal for supper and every-day-activities such as walking to the corner stone gave the enough activity for our body to really avoid the sedentary lifestyle that now invades over 80% of the American workforce since 2013, despite 70% of that same universe has declared they hate sitting, as a PR Newswire report confirmed.

Evolution of the workplace

The constant evolution of tech-trends, work habits and spaces have also had its play in this growing tendency that is known as the sitting disease. Conference-calls, the excessive use of meetings, emails and thorough deadlines have made it even more difficult for Americans to better their health habits and customs in their work environment, as walks, stand-up-meetings and physical routines have been imposible so schedule because of the never-ending transformation of the workplace that demands a 24-7 attention span.

It is clear that avoiding a sit-down is difficult for many of American workers, as the daily work tasks have turned impossible to reverse or transform, however, there are methods that can be put to practice to help your body better itself, keeping in mind that prolonged sitting is capable of reducing lifespan by promoting dozens of chronic diseases, even if you practice the habit of exercising regularly, so, sit less and move more.

Standing up, stretching and practicing walking every 10-15 minutes can help notoriously to counter-effect the ill consequences of an obsessive sitting conduct.