Who’s to blame for the U.S. government shutdown?

Who’s to blame for the U.S. government shutdown?

A poll reveals who Americans think should shoulder blame for the government shutdown.

Since Dec. 22, the U.S. government has been partially shut down.

It began when President Trump refused to approve a budget unless it included $5.7 billion to fund a wall along the border with Mexico.

Democrats, on the other hand, reaffirm that they will not agree to any new money for the wall, making the White House start to lay the groundwork for a declaration of national emergency, according to The Washington Post.

As the situation enters its 23rd day on January 14th, 800,000 federal workers have been caught in the middle and under normal circumstances, having them without pay despite being promised most of them would have been paid by Friday 11th, but didn’t.

Amid rising troubles, their has got to be someone taking the public blaming for the impasse.

A Washington Post-ABC News poll was released on Sunday, revealing that 53% of the U.S. public thinks the president and his party should be held responsible for the shutdown, while 29% feel the Democrats in Congress are accountable.

In additional data, there is a sharp partisan divide in the research with 85% of Democrats blaming the president and 68% of Republicans pointing the finger at the Democrats in Congress.

At this point, according to the survey, most Americans say they are not feeling the effects of the shutdown. 18% say they have been inconvenienced, including 7% who say it has been a major problem.

Is a wall the answer?

Support for building a wall on the border, which is the principal sticking point in the stalemate between the president and Democrats, has increased over the past year among the surveyed Americans by The Washington Post. Today, 42% say they support the idea of a wall, up from 34% of last January.

Of those 42% who support the wall, 24% say Trump should continue to demand the level of funding he has asked for, and 16% say he should strike a deal with the Democrats. 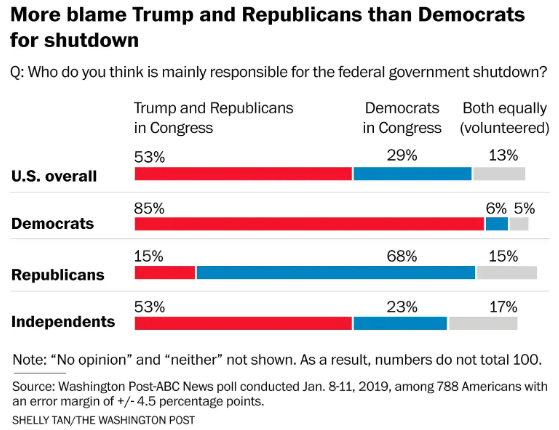 The longest shutdown in history

According to The New York Times, since the 1970s, the U.S. has experienced many shutdowns with the previous longest occurring in late 1995 and early 1996 under President Clinton, with 21 days.

President Carter shut the government down a total of 5 times. The first one being on September of 1978 when it lasted 17 days. Click here to visit the complete chart of Statista.