From LA to San Francisco on the bus

From LA to San Francisco on the bus

For 230 dollars, all taxes included, you can book a round-trip from Los Angeles to San Francisco aboard a bus equipped with sleeping pods stacked like bunk beds.

A sleeper bus start-up called Cabin is betting passengers would prefer a soundproof sleeping pod over dealing with traffic and heavy lines at the airport.

Although the service runs only between Los Angeles and San Francisco, executives plan on taking the concept to other cities that need a new form of transportation.

Cabin seeks to replace the many problems people face in traditional ways of transport, as being woken up periodically by stops, falling at sleep at the wheel or extreme fatigue can take a toll on people preparing for a long drive.

And, although by a plane, train or automobile a shorter trip is guaranteed, experiencing a new -and possible future- way of travel must not be off the table.

A bus-ride to remember and dream about

Arriving to the coach, visitors are received with a bottle of water, earplugs, a guide with a WiFi password and a shoe bag.

A host who stays up all night gives the passengers a tour so they know all details about their trip, including time of arrival and departure as luggage is stored by the driver.

Equipped with 24 beds, the Cabin is planning to be the future of traveling, if it can get to other cities and routes such as Washington-Boston or London-Edinburgh.

A work still in progress 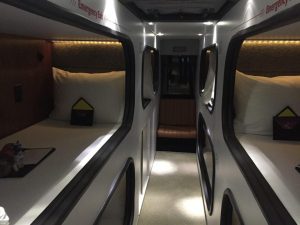 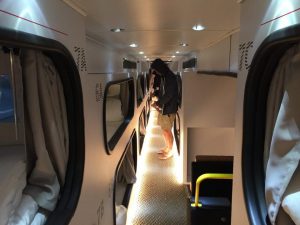